After years of rumors, speculations, and promised dates long past, Mercedes-Benz has finally begun to sell their popular Smart ForTwo here in the United States. And with a waiting list stretching longer than a year, drivers are not hesitating for their turn behind the wheel of this funky two-seater.

Even with the “right-now” popularity of this car coupled with the rising gas prices, I wanted to see if this little two-seater would be a good alternative to some of the bigger sub-compact cars in its price range.

It’s hard to miss the ForTwo. The first thing you will notice is how unbelievably tiny this vehicle really is. With a wheelbase of only 73.5 inches and an overall length of just nine feet, it makes a Mini Cooper look like a bread van! It’s the smallest vehicle sold in America, with the next biggest vehicle (the Toyota Yaris Liftback) being almost three feet long. It is a little disconcerting when you notice people staring at you as you drive by, but you’ll get used to it.

Unfortunately, the ForTwo is not exactly the best thing to view. It’s not the most hideous thing on four wheels, but with its short body, high roofline, and nonexistent overhangs, it won’t be mistaken for a Pinanfarina design. The flat-nosed front end is clean, though, if a little too reminiscent to a pufferfish, with large front fender flares and large headlamps which surround an open-mouthed grill. The rear is SUV-like, with a high-riding bumper, taillights, and a fold-down tailgate. Even between the optional 15-inch multi-spoke wheels, the ForTwo is not your typical vehicle. There’s a big door to open to access the interior, and its height is accented by a tall beltline and aforementioned roof height. A tall door can spell disaster for styling points. Still, designers did a nice job of breaking it up with a crease in the middle of the door, which leads from the front fender to the rear door edge (which looks to be about six inches compared to the rest of the Smart) as well as a cool little functional air duct behind the driver’s door.

To push this car’s styling over the edge is to order the Passion Convertible version like my test car. Press a button inside, and the canvas roof slides all the way back for unimpeded sunlight, and this roof can be opened like a sunroof as well. With the convertible, people will certainly be able to pick your picture out of a police lineup, so tread carefully. Once you’ve open that large door and stepped into the interior, you are met with a mixture of functionality, funkiness, and fair materials. Plop down into the optional leather seats (cloth is standard across the line) and look around.

In front of you in Passion is a nice three-spoke leather steering wheel. Behind that sits a large, white-faced speedometer. (A tachometer and clock are optional and are placed at the center of the dash by the windshield). Protruding from the steering column are two stalks to control headlights and wipers. Simple and functional. The center stack is laid out in a simple and easy to use manner. At the top are your air conditioning controls and two vents. Right below that is your enormous radio head unit, with a large display and buttons to control what comes out of the five-speaker Smart audio system. Keep going down, and you will find your redundant controls for the door locks and optional heated seats.

There is plenty of room all around for tall occupants. You and your companion will be able to ride comfortably without bumping into one another with 45 cubic feet of interior room. Outward visibility is overall excellent, with help from the tall roof and plenty of glass. Just be careful when changing lanes, as the canvas top in the convertible can block your view.

The leather seats are firm but very comfortable, and the steering wheel feels great in your hands. Storage space is tight because of a small glove compartment and narrow door pockets, but two openings on each side of the steering wheel help. The rear will hold two people’s luggage nicely if they leave their Samsonite at home.

So, what is so “funky” about the ForTwo’s interior? For starters, the ignition is down between the seats, a la Saab. Then there are the seats, dash pads, door panels, and the tips of the steering column stalks that come in a variety of different colors and patterns, most of which come from the 1980s, which can be fun or atrocious, depending on your tastes. The previously mentioned tach and clock located in the center of the dash makes it look fast from the outside. Don’t forget about the long emergency brake handle coming from the back, either. There are a few niggling things I wish were different. One, the cupholders are down on the floor underneath the radio and are a stretch to reach. Speaking of the shifter, which is far too close to your right leg, needs to be taller. Keep the leather ball on top though.

But there’s one thing I was really disappointed in, and that was the choice of material used to make the majority of the interior. Now, I can deal with the funky coloring and whatnot, but there is not one piece of soft vinyl anywhere. Every surface, from the dash pad to the doors, is formed of this rock-hard plastic. I’d hate to bang into anything inside for fear of breaking a bone.

Ready to take this little guy for a ride? Give that key in the center a turn. Hear that racket? That’s the 1.0 liter, three-cylinder engine idling like a diesel underneath the rear storage area. Grab that little leather ball and slip the five-speed transmission into gear. Poke the throttle, and the car shoots forward with surprising pep.

What the heck is going on here? A disaster of a transmission choice is what’s going on.

Smart decided that the best choice for a tranny is a five-speed, single-clutch automated manual. What that means is this transmission is a manual one without the third pedal or a traditional do-it-yourself H-pattern. Because of this, you get to deal with an incredibly slow and deliberate shift while the car engages the clutch, changes gear, and then disengages the clutch. It’s horrendous, annoying, and a poor decision.

Luckily for you, I have figured out a way around the sluggishness of the shift and the abrupt body movements. As you accelerate and can tell when the car shifts, momentarily release pressure on the pedal. Reapply the throttle, and you’ll be accelerating without that dreadful pause. Trust me when I say you need to learn this little technique or carry a couple airsick bags for you and your passenger.

Other than a crappy transmission, driving the ForTwo is not as bad as you would think. The little 70 horsepower engine really is peppy, with brisk acceleration. It’s not a speed demon, but it will rock out to 91 mph on the highway while achieving 44 miles per gallon. Stopping this tiny car is acceptable, with strong brakes backed by a spongy pedal. 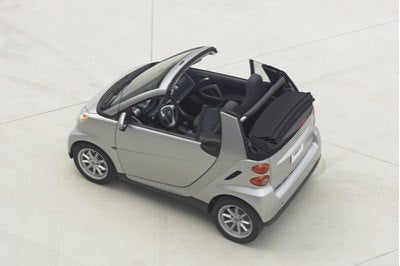 This car is no Ferrari, but the handling is sound. The ForTwo has somewhat heavy steering but is quick to follow steering inputs. Even though it has a six-foot-long wheelbase, the Smart exhibits no body roll and has agile handling, even if it understeers like a golf cart. The ride is good too for its short stature, with good tuning to soak up most bumps. Big potholes and expansion joints will thump into the interior and give the convertible an equal rattling around its windshield.

If you’re interested in one, prices start out at $11,590 for the stripped-out Pure coupe. Another $2,000 will get you into a Passion coupe, which will get you air-conditioning, a CD radio, power everything, and those multi-spoke alloys. Toss another $3,000 onto the pile, and that will grant you access to the Passion convertible. Careful, though, as adding options like leather, metallic paint, and the alarm will push your price up towards almost $19,000.

Is the Smart ForTwo the right one for you? If you want to beat the Joneses and the rest of your neighbors to the “It Car,” then this is perfect for you. If you’re looking for something that’s fuel-efficient and small to squirt around the urban traffic, there are better cars out there for the money.