Ever since automotive pioneers were able to get their early mechanical creations moving, motorsports has served as a forum to display their best.

It’s also clear by now that auto companies are as proud to gloat about their success as the drivers who wheeled their cars. In the 1960s, the youth oriented pony car battle made the SCCA Trans Am Series a place where vehicles and drivers became iconic. Even today, the Ford Mustang Boss 302 and newly-revived Chevrolet Camaro Z/28 can stir up a warring of speed.

Aware of the efforts automakers pay reliving their motorsport glory, Steve Saleen has launched a new series of tribute vehicles bidding kudos to that recognizable time in history. Billed as the Heritage Collection, Saleen has prepared specially tuned examples representing the Detroit Three’s more memorable contributions in the Trans Am Series.

Representing Chrysler, the SS Edition Barracuda, a Dodge Challenger will be styled with a paint scheme paying tribute to the blue factory supported #42 Plymouth driven by Swede Savage in the 1970 Trans Am season. Finally, Mark Donohue famous Penske Racing, SunCom Chevrolet Camaro identity of 1969 will be given a contemporary treatment by Saleen Automotive with the MD Edition Camaro. 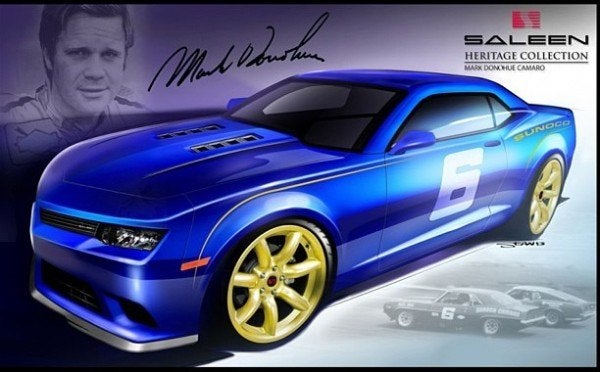 A tip of the hat to motorsport past, performance enhancements over the factory specs will be not be greatly tweaked. Depending on the selected model, the Heritage Collection vehicles produce between 400 to 450 horsepower. A track tuned suspension will also be found on the Saleen Heritage Collection series of cars.

Saleen is itself a story of a resurrected legend. Creating a series of modified Ford Mustangs from the 1980s through to the 2000s, the Saleen name is second only to Shelby in significance for pony car faithful. However, the Saleen Mustang dynasty was turned upside down when founder Steve Saleen left.

His departure occurred at a time when the performance car company was diverting its attention from modifying Mustangs to building exotic supercars such as the S7.

The company would shortly face financial problems amid a chaotic time in the auto industry. Following a protracted legal battle, Steve Saleen (who had created a new performance car outfitter initially called SMS Supercar) was able to reacquire the right to use his last name in the sale of modified vehicles.

With the new Saleen, the Chevrolet Camaro and Dodge Challenger can also be treated to the high quality performance builds previously associated with the Ford Mustang. There have also been ramblings Saleen might revisit supercar production in the near future.

The GF Edition Mustang will be the first vehicle released as part of the Saleen Heritage Collection. First vehicles of the GF Mustang line are planned for a delivery by late this year. The MD Edition Camaro and lastly the SS Edition Barracuda will follow with release intended for early 2014. Pricing for the Saleen cars is estimated to run around the mid-$70,000 range.