Production Details Released for BMW i3 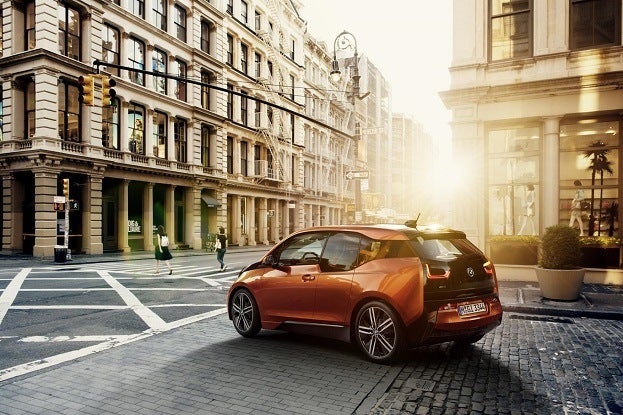 Evolving from the Megacity concept, the radical technology exhibited by the BMW i sub-brand is becoming a production reality. Ahead of a mid-2014 launch, potential customers for the electrified BMW i3 are now given a full understanding for what to expect from the technologically advanced electrified vehicle.

A 2014 or 2015 model year vehicle (European automakers are not always explicit on classifying vehicles by year), the production version BMW i3 goes on sale in the United States at a starting price of $41,350 less the $925 shipping charge. Like the Chevy Volt or Nissan Leaf, federal and state incentives will contribute to a more palatable price tag. Three trim levels (defined by auto division as “World” versions) will provide the BMW i3 in Mega, Giga and Tera models. Presented as a fully electric vehicle in base trim, a gasoline range extender can be fitted on the BMW i3 for less than $4,000 extra.

Credit should go to the BMW i3 adhering so closely to its rather bold concept car appearance. The production car maintains an edgy design within a small package. Said to be one of the first mass-produced vehicles to employ a Carbon Fiber Reinforced Plastic (CFRP) passenger cell, the BMW i3 lives up to the promises made from the German automaker on the electrified vehicle program. Recycled and renewable material is employed throughout the BMW i3 as a complement to the car’s environmentally sustainable theme. Called a black band, the i3’s hood wears a distinguishing contrasting colour allowing the car to stand out from other BMWs. A set of 19-inch alloy wheels (a 30-inch wheels size is optional) and full LED lighting will also be included on the vehicle. When the production tailored BMW i3 made its world debut in Los Angeles, one of the only design attribute altered from the concept car is found at the door panels. Accepting it as unlikely that the transparent doors on the concept car would transfer onto the production BMW i3, side styling for the small car is ultimately ruined. Towards a rear side entry door, the sheetmetal dips into a valley between the front door and rear quarter panels.

Inside the modern small car cabin, the BMW i3 makes full use of the primarily electric powertrain. A noticeable feature inside the vehicle is the exclusion of a transmission tunnel. Complying to a LifeDrive philosophy with powertrain components existing under a Drive Module, the cabin for the BMW i3 resides as the Life Module. Shielded by CFRP material used in the passenger cell and within the car’s roof panel, the lightweight, small compact car structure provides exceptional safety. BMW Navigation, BMW Intelligent Emergency Call and connectivity by a remote app will be standard on all i3 models. The Mega World version of the BMW i3 will feature sustainable cloth interior and a leather-like material called Sensatec. A full leather interior is included on the high-end Tera World model. Responsibly forested eucalyptus wood trim on the dashboard and an olive-leaf extract used as protection on the leather adds eco touches the BMW i3 proudly touts. 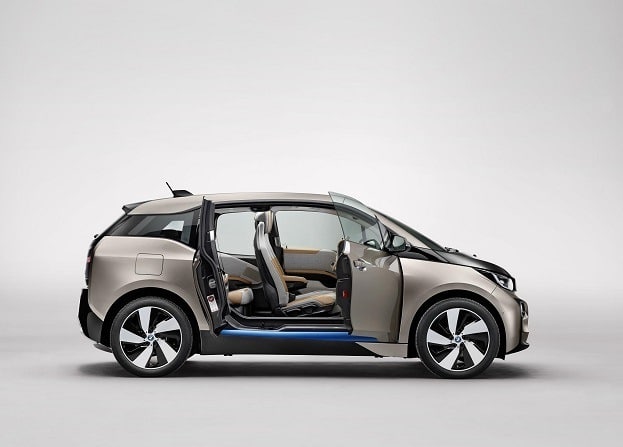 With the full electric version of the BMW i3 weighing around 2,700 pounds, the car will weigh 800 pounds less than a Nissan Leaf. Primary electric power for the BMW i3 will be supplied by a hybrid-synchronous electric motor generating the equivalent of 170 horsepower and 184 pounds feet of torque. Equipped with a 450-pound, 22-kilowatt lithium-ion battery, the BMW i3 is balanced for a near 50/50 weight distribution resulting in sporty handling and control. Acceleration is quite spiffy for the i3 estimated at 7 seconds for 0 to 60-mile per hour runs. Capable of a top speed of 95 miles per hour, the BMW i3 can travel up to 100 miles on a single charge. ECO PRO mode and ECO PRO+ mode will allow a driver to maximize efficiency for potentially greater distances. Recharging the German-built electric vehicle can be performed through a 220-volt charger in three hours. More impressively, an optional SAE DC Combo Fast Charging system could charge the BMW i3 in as short as 20 minutes with 80 percent of the battery’s capacity (30 minutes for a full charge).

Optional but perhaps desirable for buyers concerned with battery-only ranges, the BMW i3 can be fitted with a gasoline-powered, 650 cc two-cylinder range extender. A displacement size closer to what is seen with motorcycles, the gasoline range extender will double the range of BMW i3. The vehicle’s gasoline-burning powerplant fed from a 2.4-gallon fuel tank.

Though full electric or primarily electric vehicle sales have been increasing overall with addition of new products, the marketplace is still challenging. Though range is an issue, purchase prices for electric cars or plug-in hybrids have been a massive deterrent for vehicle buyers. The emergence of the premium electric vehicle market highlighted by the Tesla Model S is showing a possible area for the technology to advance. Not alone, the Cadillac ELR will accompany the BMW i3 as new entrants to a luxury electric car sector.