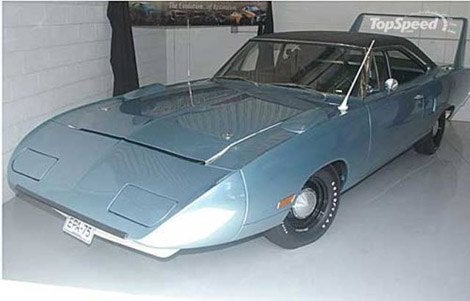 You know, car auctions, and the value attached to some cars are funny things. For no apparent reason, some car or another can become the flavor du jour amongst collectors (especially at an auction), and the next thing you know, prices rise sky high, and the chances of “normal” gearheads every affording one disappear like campfire smoke in a hurricane.

I shudder to think what will happen if these money-soaked ne’er-have-tastes turn their gaze to what are now, cheap fun cars … it could be all over.

It’s this feeding frenzy combined with fashion of the moment mindset that lead to the huge Ferrari boom and bust of the early 90s. Sure, for cars like Ferraris, I can understand it, but now comes word that there’s a Plymouth Superbird out there that some collectors are saying is worth $3 million.

Look, I got nothing against Plymouth Superbirds. They’re great cars. Unique. Tons of style. Fast as all get out, and they are a really rare commodity in one particular way: They have an American racing heritage.

The Plymouth Superbird was created back in the day when NASCAR ran actual stock cars. What you saw on the track was literally what you could buy down at the local dealer, and if any of the car companies involved in NASCAR racing were crazy enough to make and sell something like a jet-enigned sedan, it seemed like NASCAR would be OK with it.

You want to trick out your car, aero-wise? Sure, who’s NASCAR to argue with you? Then again, NASCAR figured, who would be crazy enough to go THAT overboard?

Plymouth, that’s who. Back when the 60s turned into the 70s, Plymouth really went to town in the wind tunnel and created the Superbird. Essentially a Plymouth Roadrunner with a bullet nose, sloped backlight and a HUGE wing riding high.

To say that they were fast and crushed the opposition was an understatement. And to think that you could drop by the local dealer, drop down some cash and actually drive a road legal one of these ‘Bird home seems like an insane idea in today’s world.

But you could. I remember seeing them now and again on the streets when I was a kid, just as fast and impressive there as they were at Daytona or Talladega. Then came the gas crisis of the early 70s, and Plymouth dealers couldn’t give the damn things away.

Fast forward nearly 40 years, and now the things are HOT collectors items. I routinely see sale prices for nice examples in the 6 figure range, so prices being high doesn’t seem like that much of a surprise. But $3 million?

That’s what Brian Chaffee thinks. He spent three years restoring this car back to the way it was, circa 1970. According to Chaffee, 3 million dollars seems about right.

Phil Skinner, the editor of the Kelly Blue Book Classic Guide, would take issue with Mr. Chafee’s pricing. “A few years ago, a 1971 Plymouth Hemi ‘Cuda convertible sold for $3 mil, but that was a Hemi,” related Skinner. And while a Superbird did go for nearly half a million in 2007 it came with a Hemi engine, and it was sold at a time when Hemi-powered muscle cars were the all the rage with well-healed collectors.

Skinner says that the ‘Bird in question should be listed at “around $100 to $125 thousand, give or take,” given that it doesn’t have a Hemi plant (for one thing).