There is a new car atop the Top Gear performance lap time board called the Pagani Huayra.  I think it’s time I put the latest Pagani creation at the forefront of your gearhead minds because I know it’s #1 on my ultimate wish list.

I mean that, and I’m not talking about your average wish list of attainable cars you would like to buy in the future, or even if you hit the lottery.  If someone were to ask me if I could pick any one car in existence to make my own, it would be the Huayra.  In my correct opinion it is the greatest car created to date, and it will be a while before anything quite as dramatic and amazing is created again.  In fact until they make cars that fly with small jet engines and thrusters that are readily available to people for the price of a Ferrari, this is the most epic form of transportation out there.  If the Chris Pine version of Kirk was going to have something that stuck to the ground with 4 rubber tires, this is the only thing he would get into.

I think I’ve made my point, but let us go over the performance specs of the car while we drool over the pictures.  And oh…yes, before I go on here is a general pronunciation of the cars name.  No it isn’t the Pagani (Hurr-ah), it is more like the Pagani (Who-why-ra).

I’ll start from the inside and go over the guts of the Huayra and move out from there.  A Mercedes-AMG V12 powers this car; one which is specially designed just for the Huayra and by the way, has 2 turbochargers as well!  It develops 730 cv (cheval vapeaur) which most people convert to 700 hp.  However I took the trouble to do some math and found the true cv into hp number: 719.7 hp…now you can be an ass whenever someone says it only has 700…you’re welcome!

Obviously the power of the rather compact V12 is located in the right place: between the drivers back and the rear tires.  This gives the car a 44% front – 56% rear weight distribution.  They also went for the more brute RWD just adding to the excitement of the car, truly making you drive the car, and the monstrous howling scream of the quad exhaust outlets is enough to make a Chevy Volt wee itself.  The whistle from the twin turbos sounds like the god of wind that it was named for, and might make a GT-R second guess its manhood.

Moving on to handling, this car is quite unique and has taken active aerodynamics to the next level!  To begin with the entire body is shaped like a wing, but it also has 4 wings or aero “flaps” that deploy and retract independently to assist through cornering and braking.  Through sensors the car can sense if it is unstable through a corner and deploy one or both of the front or rear flaps to gain more down-force and grip to the corner of the car that it is most needed.  This video demonstrates the active aero in action on track…and on the street a wee bit. 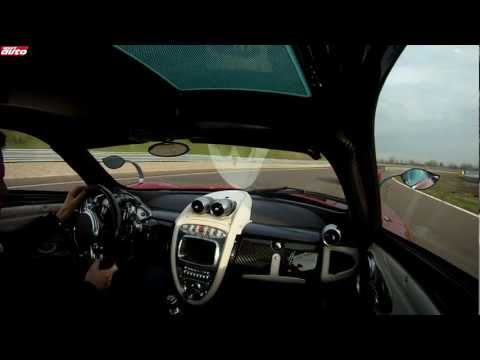 This means it can corner at much faster speeds and remain stable.  Under braking these also deploy to assist in stopping the car.  This essentially means it can brake later, accelerate sooner, and carry more speed…period.  The car also has active adapting suspension that stiffens or softens to provide optimum grip. For example, under braking, the front suspension stiffens and raises up to prevent forward body roll, keeping the nose from dipping and staying balanced.  The body is made from carbotanium, which is actually stronger and lighter than carbon fiber. Who’da thought.

I don’t think the exterior of the car is quite as sharp and beautiful as the Zonda, but it’s just as shocking and more performance focused, and as I always say more beauty can be found in form following function than anything else.  Look at a Formula 1 car for example…it is a discordant mess!  Yet you know every piece is designed to make it faster, so it is beautiful to behold.

Having said that, the interior is what truly turns the Huayra into a Hyper-Exotic car.  It’s modern and sexy while still looking faster than anything that’s ever been made before!  It makes you want to be in the drivers seat, because if it looks like this, than the experience that awaits you must be equally mind-blowing.  It’s organic and beautiful while looking purposeful and mechanical all at once.  The mixture of leathers with carbon fiber and titanium… and the digital colorful screens on the dash, beside the analog gauges…it is perfect.

This is the perfect car.  It is so original and so organic in its design but it’s also engineering perfection.  Form following function, science and design side by side.  But this should be a benchmark, not a one time pantomime expression of what a car CAN be No…this is the ultimate expression of what a performance car SHOULD be!

20 years from now, your average sports coupe should look almost as epic and beautiful as this, and should be able to do 200, not a mere 150.  Because in 50 years we should be piloting cars that defy gravity and have turbine thrusters, or what have you.  We as humans are constantly pushing boundaries, pushing ourselves to do more amazing and stunning things.  Shouldn’t our cars do the same?  100 years ago people paid to see cars rumble around a brick track in Indianapolis at 70 mph.  50 years ago the Jaguar E-Type coupes did 149 mph at top end, and were considered the Veyron of their time.  Car companies need to look to Pagani for the future.  What’s considered the ultimate or the pinnacle now, should soon be considered the normal.  As for now though, the Pagani Huayra is the best car in the world.