No Go: Consumer Reports Tests Fisker Karma, It Breaks Down

Yikes. Fisker hasn’t had the best streak of news lately. Last year Karmas began to be delivered, the Department of Energy was pumping in hundreds of millions and everything at Fisker appeared to be on track. Now, with the use of DOE funding turning into a partisan issue, the government is looking upon funding for Fisker much more warily.

Today, attention is not turned to funding but rather the product itself. Few will disagree that the Karma is a visually stunning vehicle. Gorgeous, in fact. The Karma looks exotic and every bit worth its asking price. As far as functionality goes, it is a different story and it is evidenced by issues Consumer Reports is having with the car.

The first interesting fact is that CR decided to test the car period. CR is better known for its straightforward evaluations of the appliances purchases that make up a majority of car sales. Anyhow, the magazine, as is par for the course with its evaluations, purchased the car from a local dealer. This means the car was bought in the same fashion as the consumer, with no special treatment given to the manufacturer. Days into the evaluation, the Karma was performing initial speedometer calibration tests when a dashboard message began to sound indicating a major fault.

The car was stopped and CR’s technician put it into park in order to determine the issue. Then the car’s transmission disabled any motion gears until an hour later when it was put into drive for just a few feet. This is all happening with under 200 miles clocked the car’s odometer. The Karma is powered by an Ecotec four-cylinder from General Motors, mated to an electric drive system and lithium ion battery pack.

Given these issues, CR called the Fisker dealer who sent out a flatbed truck to tow the vehicle away. $107,850, brand new, tow truck. Sounds like a PR disaster. Hopefully Fisker will get the situation fixed very quickly and the car won’t experience any other issues in CR’s car. Unfortunately for Fisker, having the Karma in CR’s possession only ensures each issue will be sounded out through a megaphone. 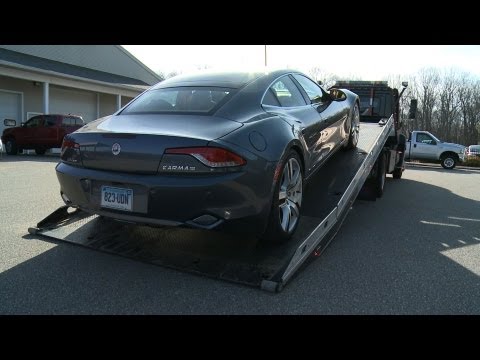