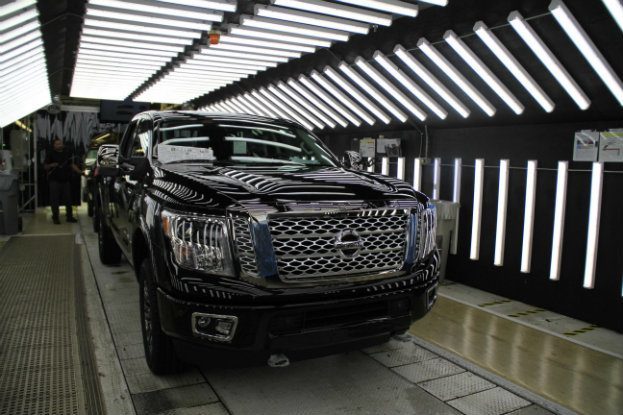 The 2016 Nissan Titan XD is an all-new creation and the result of long hours invested by everybody on Nissan’s team. Extensive planning, design, engineering, and testing when into Titan XD.

“It has been a long, hard journey and I want to express my appreciation to the entire Titan XD team,” Muñoz said.

Muñoz highlighted the importance of manufacturing in bringing the new Titan to life.

“And now, the real hard work begins right here on the production line – delivering the promise of innovation and excitement designed into the new Titan to our customers,” he said.

The Canton plant opened in May 2003 and has produced more than three million vehicles since then. 6,000 plus employees manufacture the Altima, Armada, Murano, Frontier, NV Cargo Van, NV Passenger Van, and now the Titan XD inside the 4.2 million square foot facility.

The impact on Mississippi has been tremendous.

“When Nissan opened the doors on its assembly plant in 2003 in Canton, it thrust Mississippi into the global spotlight. Our state’s automotive industry has grown exponentially since that time and shows no signs of slowing down,” Gov. Bryant explained.

Nissan sales in the United States have increased 6.2 percent this year through October, led by sales of Rogue and Murano. The all-new Titan is expected to increase those numbers while enhancing Nissan’s overall presence in North American manufacturing.

“Nissan enters 2016 not only with a reinvigorated product lineup, but also with tremendous momentum in terms of sales and share gains,” Muñoz said. “And one of the key reasons for our success is our dedication to building the vehicles we sell in North America here in North America – with 85 percent sold here, built here.”

“In Mississippi, elected leaders are working to create an environment that supports innovation in the private sector and prepare a workforce ready for the jobs of tomorrow,” he said.

Blurring the lines between heavy and light-duty trucks, Titan XD is unique, combining attributes of a heavy-duty powerhouse with a light-duty price tag. Under the hood: A 310 horsepower Cummins 5.0L V8 Turbo Diesel, paired to a 6-speed Aisin automotic transmission. When properly equipped, Nissan Titan XD will tow more than 12,000 pounds.

It will be offered in three cab configurations, two frame sizes, three powertrains, and five grade levels. Final pricing is forth coming but expect between $42,000 to $62,000, depending on the truck’s configuration.

The Titan may not be a household name like other trucks. Then again, it depends on who is running the house doesn’t it? Customers looking for the middle ground between heavy and light-duty trucks should be content with the Nissan Titan XD.