Ford just released the 2013 Fusion NASCAR racer, and at the other end of the racing spectrum is Nissan with the Nismo GT-R GT3. In addition to being a video game favorite, the GT-R has a history in motorsports.

There have been a few different versions of the car tailored for different racing series around the world. Japan has a racing series called Super GT that the car competes in. Worldwide, there is the FIA World Championship which we all know of. These series are manufacturer-sponsored and they feature modified vehicles that aren’t available to the public. Until now that is. Private teams and track-day racers, you have your car. Just be prepared to shell out some serious dough.

The Nissan Nismo GT-R GT3 (what a name!) was developed by Nismo (hence the name) and JR Motorsports, who runs Nissan’s program in GT1. The Nismo GT-R is developed to meet GT3 specifications. Under the hood is the production car’s twin-turbocharged 3.8-liter six-cylinder, making 523 horsepower. That is down slightly on the 2012 production model’s 530 hp. 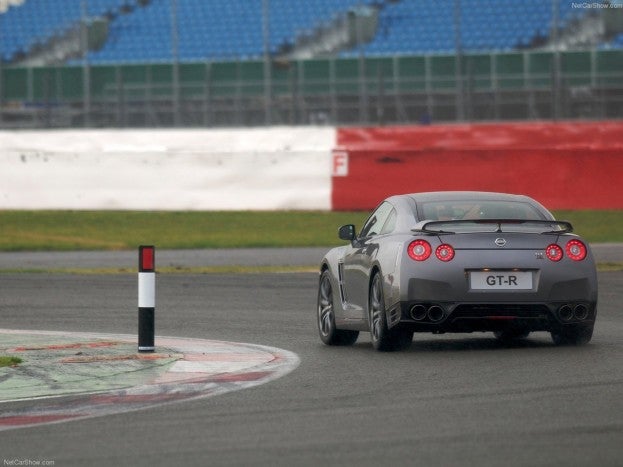 The real changes don’t have anything to do with the power train though. Visually the aerodynamics package is the most noticeable – such as that protruding font splitter. Added scoops, vents flares and the like are all designed specifically to help aid downforce.

The huge rear wing also reminds us a bit of the outrageous ones we see thrown on little Hondas and Nissans. This one actually has a purpose though! Weight on the Nismo GT-R is down significantly, to just 2,866 pounds. That is a huge figure, and responsible for the much better figures this car will post. By comparison, the production GT-R weighs in at 3829 pounds.

The interior has been entirely decontented, with a roll-cage, racing seats, harnesses and the like taking the place of convenience items. An adjustable suspension and extra ventilation round out race-ready changes. Remember what we said about serious dough? The Nismo GT-R GT3 will set you back about $390,000 dollars at current exchange rates.