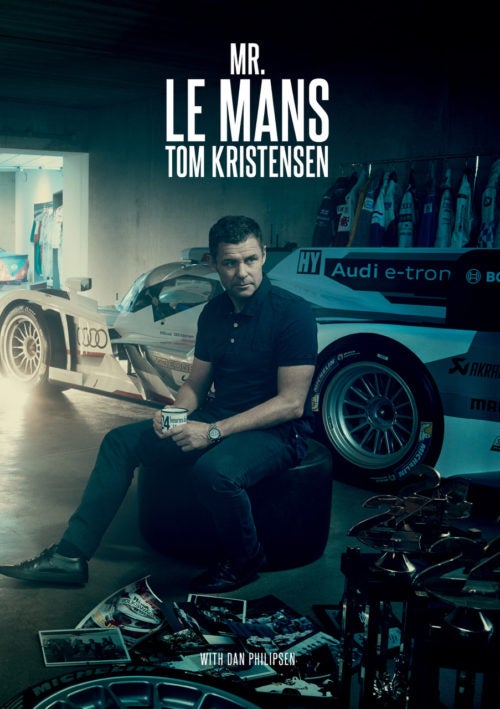 Affiliate Disclosure: As an Amazon Associate, Automoblog earns from qualifying purchases, including the book featured here. If you purchase Mr. Le Mans: Tom Kristensen we will earn a commission (this comes at no additional cost to you).

Calling yourself “Mr. Anything” takes a certain amount of arrogance. It’s completely immodest, and very few get to self-apply that title. That’s why this book’s title, Mr. Le Mans: Tom Kristensen, is both right on the money and strangely off. Tom Kristensen is a lot of things. However, he’s not full of himself, loud, obnoxious, or an otherwise complete jerk. But one thing you can definitely call him is Mr. Le Mans.

In His Own Words

On one level, this is a surprising book: It’s written by Tom Kristensen. A lot of famous peoples’ autobiographies these days are very much bio and not much auto. As near as I can tell, Kristensen actually wrote this himself, in Danish, then had it translated and gone through by nominal co-author Dan Philipsen. This fits because Tom Kristensen is a model of modern Danishness. He’s got the broad handsome features, the thoughtful, very well-spoken demeanor, and the quiet, Nordic stubbornness that means he’s going to see something through to the end. Before anyone would mention that he’s from Denmark, you could pick him out as being from the same place as Niels Bohr and Søren Kierkegaard.

The only difference is that Tom Kristensen is very good with a car. Very, very good. He has won the Le Mans 24 Hour race nine times. Nine! The next closest guy, Jacky Ickx, has won it six times. Kristensen won six out of his nine races in a row. That’s double the number of follow-on victories than the next group of guys who did three in a row. They call him Mr. Le Mans because he is Mr. Le Mans.

Not Your Average Story

What makes this book so interesting, and in many ways rare in the modern famous person autobiography field, is how unblinking and true it is. So many sports bios start with “I got my first home run/win/tryout when I was just . . . ” and plod on from there, little more than a list of wins, statistics, and losses. But not this book.

Mr. Le Mans starts out talking about a tennis match he played with his best friend before his racing career ever really started. Chapter one is, more or less, about losing versus winning, what it means to be competitive, what it means to believe you can do something, and having the confidence and humility to accomplish your goals. Kristensen knows and deftly communicates that humility is one of the key components of being good at something. Because if you don’t know your limitations, and if all you have is arrogance and self-confidence, then you’re never going to overcome your limitations. And everybody has limits, even nine-time winners at Le Mans.

Sure, Kristensen talks about racing, but he also talks about his relationship with his mom and sailing with his dad (keeping up the stereotype that literally every Dane I’ve ever met messes around with boats). Kristensen also explores what it’s like to be a father himself, his relationship with teammates, loss in general, the nature of friendship, rivalries . . . you know, a well-examined life.

In an odd way, the most emblematic example of this in the book is a seemingly innocuous photograph. On page 138, there’s a mild shot of Tom and his Audi teammate Michele Alboreto at Sebring in 2000. Michele is reclining back into Kristensen; both of them are smiling. Racing fans will know that Alboreto was killed in a testing accident in Germany not long after this. Just one of those run-of-the-mill tragedies our sport produces.

A lot of books would have mentioned that in the caption. But in Mr. Le Mans it simply reads “Tom and Michele Alboreto at Sebring 2000.” That’s it.

That photo, like the whole book, seems to say, “Yes, we know what we’re talking about here, but let’s go deeper. Racing is obvious. Death is obvious. What’s not obvious is . . . ” Which is what kept me turning the pages. This is a rare book, stylistically speaking, but then again, Tom Kristensen is a rare guy.

And speaking of photographs, the photography in this book is fantastic. There are tons of candid shots (with the family, with teammates, behind the scenes, and such) but many great racing shots with excellent color reproduction. There are shots where you didn’t know a person could look that tired and photos of unreserved joy.

Between 1997 and 2014, Tom Kristensen won the world’s toughest motor race, the Le Mans 24 Hours, a record nine times, and finished on the podium on five more occasions. Every time his car made it to the finish, he was in the top three. It’s no wonder this great sports car driver is known as Mr. Le Mans to racing fans worldwide.

Now retired, Kristensen shares in this book his deepest personal reflections and insights from inside and outside the cockpit. He looks back on more than 30 years spent striving for perfection in racing and tells of the battles and setbacks that sometimes seemed impossible to overcome, including a terrible accident in 2007.
Grab It On Amazon

This book, through and through, is rare in today’s world of pre-fab honesty and pre-packaged emotions; it’s True with a capital T. This book proves that Tom Kristensen is Mr. Le Mans, but it also shows that he is, more than anything else, just himself. As of this writing, you can grab the hardcover version on Amazon for $42.99, with used versions going for a little less. Either way, you won’t regret reading it.