Depending on person talking, the relaunch of the Fiat automobile brand in the United States late last year can be categorized anywhere from a complete success to a disappointment.

So far, over 20,000 examples of the trendy subcompact Fiat 500 have been sold through distinct dealership for the US marketplace. Performing below the lofty expectations set by the auto company, the high-profile ad campaign that included a product placement deal with Jennifer Lopez has left many people to expect more from the Fiat 500. Optimism rests on the Fiat 500 being excited by the addition of the 500 Cabrio, the 160-horsepower Fiat 500 Abarth and news of a practical five-door model in the future.

Chrysler‘s Mopar division has also gotten into the act of installing some excitement on their corporate sibling‘s small, new vehicle. While Mopar has previously interacted with the Fiat 500, an all-new factory-direct sport package deeply marries itself with the Chrysler family. With 2012 being Mopar’s 75th anniversary, the Pentastar outfitter welcomed the Fiat 500 into the celebration with a ‘Sting’.

Called the 2012 Fiat 500 Stinger, Mopar shows off a two-stage conversion where styling and performance have been centralized. People really in touch with motoring history would recall the “Stinger” name attached to 1966 and 1967 model year Chevrolet Corvairs. Prepared by auto dealer Don Yenko, the Yenko Stinger was a performance-perfected version of the European-inspired Corvair. From an entirely different company in an entirely different era, the Mopar-derived Fiat 500 Stinger is also an aggressive application of American racing desire.

Contrasting the Fiat 500 Stinger yellow, Mopar has added touches of black accenting along the outer shell including stripes that run solid from the headlamps before transitioning to a checkered pattern at the rear.

A black chrome finish is also applied on the door handles as well as the Fiat 500 Stinger’s mirror car. 17-inch black aluminum wheels within high-performance tires completes the Mopar exterior dress-up of the subcompact car‘s Stage One trim. 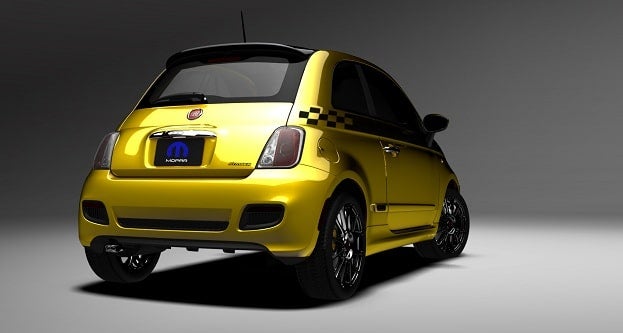 Preserving the fuel-efficient, 1.4 liter MultiAir engine’s 101 horsepower, the Stage One trim for the 2012 Fiat 500 Stinger may not be the type of shot some Mopar fans would be hoping to find from such a sport tuner appearance. Improving the physical performance of the Fiat 500 Stinger is the task of Mopar’s Stage Two kit.

Featuring track-proven upgrades cross-drilled performance brake rotors provides the Fiat 500 Stinger with more enduring stopping power. The improvement in braking is even more important as the MultiAir powerplant has a higher performance potential thanks to a cold-air intake assembly and a cat-back exhaust.

Judged the “Hottest Sport Compact Car” at the 2011 SEMA Show, the Fiat 500’s potential as a tuner vehicle is being solidified by the Stinger package. Interested, new Fiat owners only need to review the Mopar product catalog in order to build their own 2012 Fiat 500 Stinger.