Warm up Once More to Mercury: The Cyclone

Continuing a Monday salute to Mercury which started with the Marauder last week, this time we will pay tribute to one of the brand’s most overwhelming forces; the Cyclone.

Existing as a high-performance edition of Mercury coupes, the Cyclone name debuted as a high-end, performance-minded Mercury Comet (the brand’s equivalent to the compact Ford Falcon). Sold as the Comet Cyclone between 1964 and 1967, Mercury’s intent to tweak the small car with a V-8 powerplant was a developing trend through the mid-1960s.

Ironically, it was fellow fallen General Motors brand Pontiac who gave birth to the idea of inserting a high-output V-8 into the 1964 Tempest. Creating the Pontiac GTO, the GM division has been credited for igniting the muscle car era’s essence.

In the Comet Cyclone’s premiere year, a Super 289 cubic inch V-8 engine was employed to produce 211 horsepower. Optional equipment such as special carburetors and valve covers allowed the Comet Cyclone’s engine to be a severe weather system with 271 horsepower. The Cyclone package also fueled the appearance of the Mercury Comet into a more serious street machine.

Bucket seats, tachometer, and wheel covers are all part of the Comet Cyclone’s look. Over the next few model years, the V-8 engine displacement grew to 390 cubic inches and later up to a 425 horsepower, 427 cubic inch FE engine by 1967.

1968 and beyond, the Cyclone moniker elevated itself to stand solo within the Mercury division. The 1968 Mercury Cyclone also adopted a slick-looking fastback version. The Cyclone fastback was followed-up the next year with the Cyclone Spoiler II (Mercury’s take on the Ford Talladega). A few 1969 Mercury Cyclone became the automotive example of a historic meteorological event.

A rare 260 cars are fitted with a Cobra Jet 428 cubic inch V-8 powerplant rated at 335 horsepower. According to a Car and Driver test, the Mercury Cyclone CJ accelerated in a 0 to 60 mile per hour time in 5.5 seconds.

As with practically any vehicle of the muscle car era, the Mercury Cyclone built up its street creditability on the racetrack. Finding popularity in drag racing right off the bat, the fastback introduction made the Cyclone a famous sight in NASCAR’s counter-clockwise action.

In fact, the fastback Mercury Cyclone was such a popular body style within NASCAR that the vehicle remained in active duty years beyond its final production year. 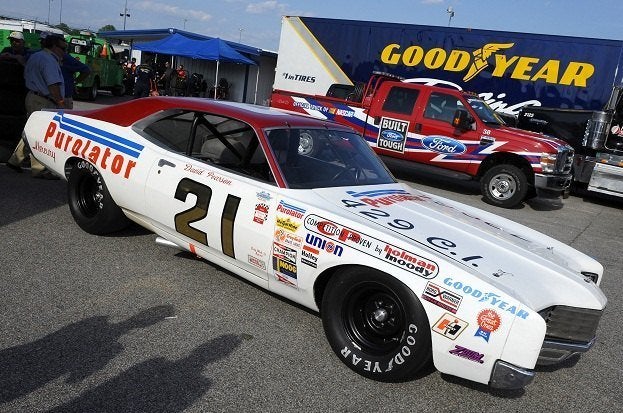 One of those late appearances was the 1976 Daytona 500, which featured one of the greatest battles for David Pearson and Richard Petty’s victory. Pearson, driving a Wood Brothers-prepped #21 Cyclone, was fighting off Petty’s Dodge out of the final corner of the race’s final lap until both cars made contact.

The Mercury Cyclone of Pearson makes a front end impact with the wall while the #43 STP Dodge of Richard Petty skated into the infield suffering severe damage. Despite Petty being closer to the finish line, the Dodge stalled, allowing Pearson’s smashed Cyclone to limp to the Daytona 500 win.

Not limited to competition, the Mercury Cyclone was involved in a monumental auto racing honor. In 1966, a convertible GT version of the Mercury Cyclone paced the Indianapolis 500. This Cyclone would be the last Mercury product to serve pace car duties at the Brickyard classic.

While the #21 Wood Brothers Cyclone soldiered into victory lane in the hands of David Pearson, Mercury had already waved the checkered flag on their street machine. In the last year of production in 1971, only 2,281 examples of the Mercury Cyclone were sold, signifying the muscle car era’s petering.