Mercedes, logically, slowly and methodically, is getting into the green game more and more. Check out the latest example, the S-Class S 400 Hybrid. The boys from Stuttgart aren’t doing things half way, they’re not trying things out on lower range models, and then moving things up the corporate food chain. Nope, Mercedes is starting right at the top, with the S-Class. 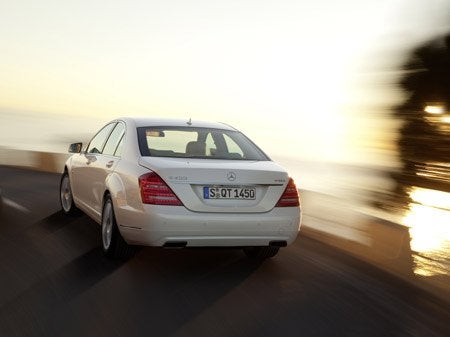 When this press release first landed on my desk, the first thing I thought of was the top of the line Lexus hybrid (probably not what Mercedes would have liked), and the enviro-boondoggle they found them selves in when they sent copy number one to Paul McCartney via air freight (think about it for a second).

Anyway, Mercedes won’t be making that sort of mistake, I’m sure.

The press release starts off in the most bombastic fashion: “Exclusive design, the greatest possible comfort and trailblazing innovations … ” Good God, I hope it calms down or I won’t be able to read much more. Luckily it did, and some hard data is contained within.

For example, not only is Mercedes interested in what a hybrid drivetrain can do, but they also looked at the entire car’s life cycle, and how to maximize environmental benefits. The S 400 HYBRID (and yeah, Mercedes uses all caps for some annoying reason that is never made clear) is made to have as little impact on the planet as possible from production to operating the car and eventual the recycling/disposal of the ride when its time is done. As a matter of fact, Mercedes so worked the environmental aspect of the cars life cycle that they received an environmental certificate by the independent examiners at the technical inspection authority TÃœV SÃ¼d. The 2005 S-Class was the first automobile worldwide to get this certification, and now Merc has added the hybrid S-Class to the list.

The new S 400 HYBRID is the world’s first series production car to feature a hybrid drive system with a lithium-ion battery. Under the hood there’s a V6 petrol engine and a compact hybrid module that cranks out a combined 299 hp, with a combined maximum torque of 385 Newton meters. The S 400 HYBRID hits 62 from a standstill in 7.2 seconds and tops out around 250 km/h. Talk about having your cake and eating it too.

The S-Class hybrid also features an ECO start/stop function that automatically switches the engine off when the S-Class comes to a stop. And during deceleration, kinetic energy is recovered and stored in the lithium-ion battery in the engine compartment.

There’s no mention of when the S-Class hybrid will hit the showroom floors in the press release, nor is there any mention of price … but you’ve got to figure it will be expensive as all get out. Still, if you’ve got the scratch and the inclination to drive a hybrid, it will be a car worth looking into.