Whether the McLaren MP4-12C can be a serious threat to Ferrari road cars or not remains to be seen. But a quick glance at the specs of their latest, and it’s pretty clear that the likes of Porsche, Aston-Martin and so on are about to get bitch-slapped like a convicted bank robbers new celly.

Yeah, that’s what I thought.

And no, if you’re a manufacturer, and thinking you can beat that, keep in mind this is just the FIRST of a range of McLaren cars they are planning.

McLaren is setting up to produce up to 1,000 12Cs to be delivered in 2011 through a global network of dedicated McLaren retailers. The sales offices will be set up in all the major markets in North America, Europe, Middle-East, South Africa, and Asia-Pacific. Over 500 have applied for slots to be retailers, but only 35 will make the initial cut for franchises in 19 countries. McLaren also highlights that their road car division will focus on aftersales, quality, innovation and ‘clean-sheet’ business plans.

They also say that ” … initial interest is very strong with 1,600 ‘expressions of interest to purchase’, 12 months before launch. ” But that’s to be expected, and that’s also a good ratio to keep in mind, since not all of those 1600 will be there with check in hand in a year’s time. 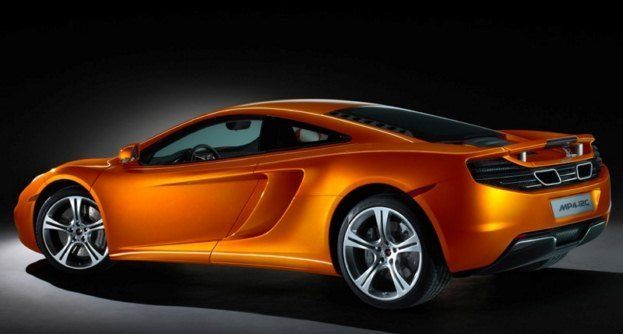 Anyway, McLaren’s aspiration for the new automotive company is to go up against world’s best sports car brands head-to-head with a range of two-seat cars. All the while introducing innovative technologies, business practices and customer experiences that ” … will re-write the rule book for the automotive industry.” Well okee-dokee Ron. Never one to shy away from telling people how great you are, were you?

Although I have to quibble with this statement: “McLaren is approaching its new road car business in the same focused, agile and passionate way that the company’s motorsport division has practiced throughout its 40 year history as the world’s most successful motor racing team. ”

Ah, no Ronny. The world’s most successful motor racing team is Ferrari, and you guys ain’t even close. Like you could put that out (in print no less) and not be called on it? Don’t be such a punk-ass.

But back to their first offering. They say that the 12C will be ‘pure’ McLaren, and they ain’t lying about that. Every part of the 12c, from the V8 twin-turbo race-derived engine to all switches and electronics, are designed by McLaren.

And that also means lots and lots of carbon fiber (which you would expect). The 12C features a revolutionary one-piece molded carbon chassis, called “the MonoCell,” that McLaren says will cascade technologies into a new market for this strong and lightweight material. The 12C will be the first car in the £125,000 to £175,000 market segment to feature a carbon chassis.

I say either get in line, or get to working on building a better mousetrap.