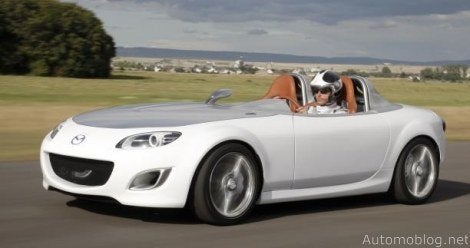 Mazda are celebrating their 20th anniversary of the first MX-5 Miata roadster by creating yet another special edition. Unlike the production 20th Anniversary Edition, this MX-5 Superlight Edition will not be produced, but was created as a show car to demonstrate “how individual mobility can be maintained in a way that uses fewer natural resources,” according to Mazda.

The MX-5 Superlight Edition was unveiled at the 2009 Frankfurt Motor Show today and shows off the possibilities and character of the MX-5 by coming in at under 1000 kg (2,204 lbs.) This is helped, of course, by the lack of a top, windshield, or windshield frame. The completely open top allows for other show-off attributes such as no door handles or side windows. To further assist in the reduction of weight, Mazda fitted the MX-5 Superlight with plenty of carbon fiber. The racing bucket seats, “floating” center console, and dashboard frame are all made from the lightweight and strong material.

The MX-5 Superlight is fully drivable (though I’m not sure street legal,) and powered by a 1.8-liter four-cylinder mated to the production MX-5’s 5-speed manual transmission developing 124 horsepower. Additions include a cold air intake and Mazdaspeed exhaust designed to make the engine sound more powerful than it is, or in Mazda’s words, “designed to suggest an engine with much higher displacement than the concept actually has.” A few technical upgrade are in place as well, including an upgraded and lowered suspension and upgraded brakes. The 17-inch wheels on the concept are from the production MX-5 2.0. A strange move for most manufacturers, but done to emphasize how light the wheels are in the real MX-5 (about 17 lbs each.)

Overall, a pretty cool concept meant to show that the MX-5 is a true, lightweight driver’s car. Mazda didn’t go all-out on this one; they just took the production model and made the changes to it. A frugal move, I suppose.