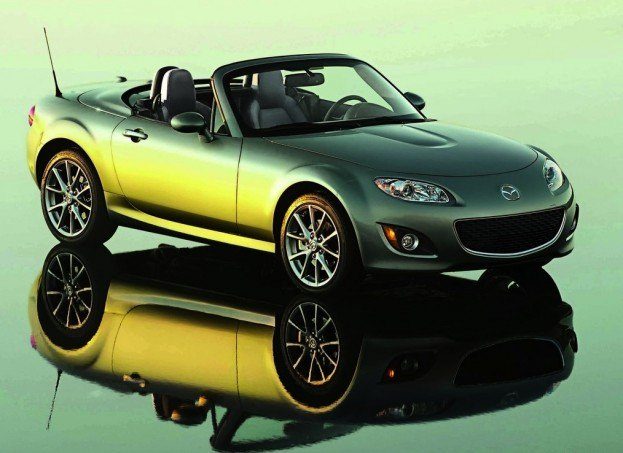 Mazda recently announced that its beloved MX-5 roadster had crossed the 900,000 unit mark. That’s a lot of roadsters, and the milestone was reached over 22 years since the original launched in 1989. The MX-5 is the world’s best-selling two-seater, a record it has held since 2000.

With the Chicago Auto Show in full-swing, Mazda has released a new special edition model, apparently to celebrate the occasion. Introduced as a 2006 model, the current MX-5 is likely to set to get replaced in the near future, a possible reason for Mazda’s introduction of a special edition.

The special edition MX-5 gets a really clever name (not) – it is dubbed simply the MX-5 Miata Special Edition. The model is limited to just 750 units and is differentiated primarily by its black and gray interior color scheme, chrome air vents and instrument colors along with aluminum pedals on the manual transmission model. The Special Edition comes standard with Mazda’s Power Retractable Hard Top (PRHT) and will include all the features of a fully-equipped Grand Touring model with Premium package.

In addition, the Special Edition adds the Suspension package which includes Bilstein shock absorbers, a limited slip differential (LSD) and stiffer suspension tuning. The 2011 MX-5 Miata Special Edition is exclusive to North America and starts at $30,925 when equipped with a manual transmission, and $31,525 when opting for a six-speed automatic.