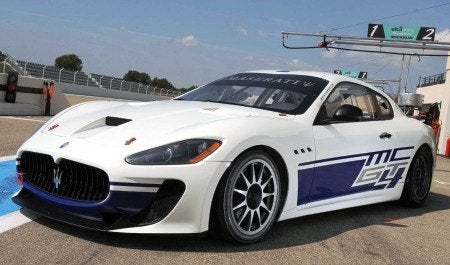 To quote Lando Calrissian, “What have we here!?” What we have is Maserati’s new track special, the GranTurismo MC. It’s a track only car aimed at the well-heeled gentleman racer (or woman, for that matter). Sure, it’s nice, and we’ll dig into the details soon, but what’s really nice is to see Maserati return to the racing game, even if it’s in a limited way after all these years.

Maserati used to be a VERY serious player in the racing world. Maseratis won at the Indy 500, they were the car that the great Juan Manuel Fangio drove to his greatest victory every at the German Grand Prix at the ‘Ring in 1957, Tazio Nuvolari raced for them.

But Maserati has been a car company that’s been knocked from pillar to post, almost since its inception by the Maserati Bros. Financial troubles dogged them to an extent that would have made John Z. Delorean turn Tony Montana much faster. They’ve been bought, sold, nearly broken up, nearly folded altogether, bought by half-assed groups of non-Italian investors … if this would have been happening behind bars, you would have thought that Maserati was the new chubby white guy in HBO’s OZ.

Enter Fiat some time ago … who flew in and scooped up Maser, and saved them from a slow & ugly fate. And what do we, the gearhead, get in return? Totally cool cars, that’s what.

Privateers (no factory teams as of yet) will run the GranTurismo MC in some GT4 European Cup events during the second half of this season, and they’re going to be pretty well funded, since the car will run them 135,000 Euro + VAT. Maser is also looking to organize a European single-make cup race in 2010.

So, a step in the right (racing) direction from a venerable and august old marque. Now all Maserati need to do is start making purpose built racers at start running them out of the factory.

Sports cars at Le Mans sounds like a good place to start.