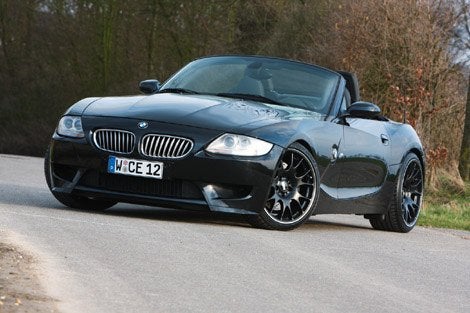 “These crazy bastards dropped a V10 into the Z4. Nice.” That’s what head Automoblog dude Christopher said to me in an email moments ago. Yeah, nice AND crazy all at the same time. Our kind of people these folks from Manhart. I (and I’m assuming Chris) love people that do things like this; V12s into Miatas, mid-engine Mini Cooper conversions, that sort of thing.

Of course, putting an aircraft engine in a 50s vintage car is one thing, doing an engine swap in a modern car, with all the electronics and whatnot, is a bigger deal.

OK, let me get the negative stuff out of the way first: I don’t like the styling of the Z4 very much. It’s another bungled design job from BMW, one of many of late. Yes, I know the things are a blast to drive, great chassis and all that, but the body just doesn’t cut it.

Anyway, on to what Manhart has done. 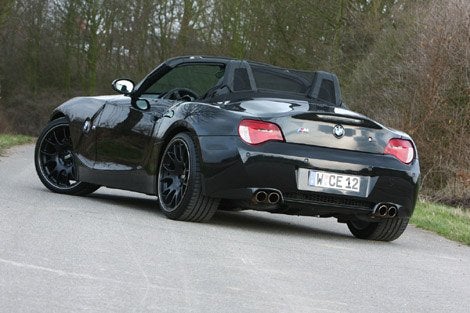 They start with the “basic” M version of the BMW Z4, which is already pretty damn good. As the Z4 M sits, it’s already dealing with 343 HP, but the folks from Manhart feel it could use more. So why not stuff a V10 in there?

“As is generally known however, the sport oriented motorist can never have enough power at his command.” or so states GÃ¼nther Manhart, and we’re not going to argue with ironclad logic like that.

The new mill in question is the ten-cylinder engine from the current M5. Good a place as any to start. Shoehorning it into the narrow confines of the Z4’s engine bay was not all that easy, but the engineers from Manhart Racing got it done. And the resulting new motor, a 5.0 liter V10 now puts out an impressive 550 HP. In addition to just getting the engine in there, Manhart also worked over the DME electronic control unit and had the good “sense” to do away with the factory-set V-Max restriction of 250 km/h as part of the rebuild. Downstream from the new mill there’s an original M5 E60 6 gear manual transmission from the original donor. In between the plant and the tranny there’s a Fichtel & Sachs clutch and out back there’s the M5 E60 differential. Breathing, or at least exhaling, is handled via an AC Schnitzer stainless steel exhaust system, the four muffler tips are a nice touch as is the HJS racing catalytic converters. OK, so maybe I can get over the looks. The M version of the BMW Z4 is famously known by nature for being anything but underpowered, since the chassis of the sports convertible already has a heck of a lot of work with the 343 HP and the forward thrust in the lower gears could last forever.

As is generally known however, the sport oriented motorist can never have enough power at his command. Sufficient cause for GÃ¼nther Manhart, who by now has over 25 years experience in rebuilding BMW engines – a first for Europe – to transplant a brand new, much stronger heart into the Z4. The transplantation of the ten cylinder engine from the current M5 generation into the narrow engine bay of the roadster was anything but a walk in the park and it earned the Manhart Racing engineers quite a few grey hairs. Nevertheless: everything fitted in the end and now the fire of a 5.0 litre V10 engine with an impressive output of 550 HP blazes above the front axle of the Z4. A catalytic converter, a modified DME electronic control unit and the removal of the factory-set V-Max restriction up to 250 km/h are part of the rebuild. Consistent to the M5 V10 engine Manhart Racing has treated the Z4 to an original M5 E60 6 gear manual transmission which includes a Fichtel & Sachs clutch and a M5 E60 differential. An AC Schnitzer stainless steel exhaust system with four muffler tips which was fitted with HJS racing catalytic converters caters for a perfect V10 sound at the rear.

Conclusion: 550 HP ten cylinders, an acceleration from 0 to 100 km/h in 3.9 seconds, kerb weight 1450kg, 2.6kg per HP… who could guess that these impressive figures belong to a Z4? Hardly anyone, however Manhart Racing turns dreams into reality and does this with 25 years experience.