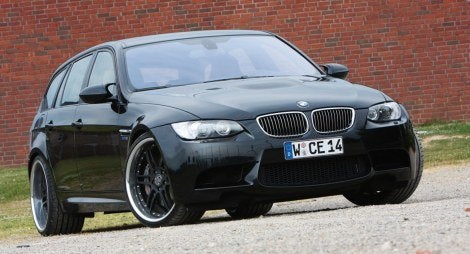 German tuners Manhart Racing got tired of BMW not offering the M3 as a Touring model (wagon,) so they decided to create one themselves. They took the standard 3-series wagon (not available in the States,) and added their own body work, consisting of a front apron, front side panels, side skirts, and the “powerdome” hood from the M3 sedan, then designed their own M3-style rear apron and widened the rear wheel-arches.

Naturally, the standard 4.0-liter, 420 horsepower V8 engine wasn’t good enough, so they upgraded it to the 5.0-liter powerplant from the M5 that produces 500 hp. Still not satisfied, Manhart tuned the ECU and exhaust so the V10 would produce an impressive 550 hp. That power is kept in check by a 7-speed SMG gearbox, also taken from the M5. 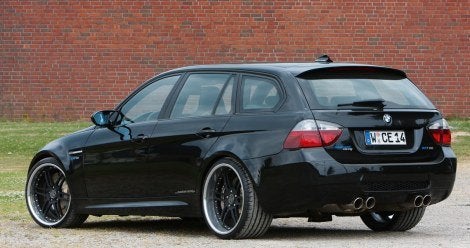 These improvements allow the Manhart M3 Wagon to travel from 0 to 62 mph in only 4.3 seconds and hit a top speed of 201 mph – seriously impressive for a wagon, and easily defeats standard BMW M3 and M5 models.

Suspension improvements include an adjustable Bilstein system, and bigger RAD Monza forged wheels. The car comes to a stop thanks to a big Stoptech braking system with six-piston calipers in front, four-piston in the rear. 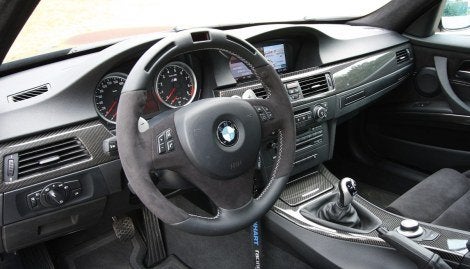 Manhart says a completed car will cost â‚¬120,000, or about $178,000 at the time of this writing. Owners of current BMW 3-series wagons can also choose to have their car upgraded instead of buying the whole thing. Not cheap, but you’ll have one of the fastest wagons on the planet.