Luxury brands like BMW and Mercedes-Benz have an advantage in maintaining a premium perception. That is because, unlike Audi and Lexus, for example, they are not part of a larger mainstream automotive empire. As with anything though, there is pros and cons.

The flip side to the equation is that, being under a corporate umbrella results in greater economies of scale and profit margins. That is why BMW is introducing downmarket models and Mercedes-Benz has struck a partnership deal with Nissan.

To be considered a true luxury brand though, your products have to be well-differentiated, and it can’t hurt to have some exclusives thrown in the mix – a la Audi R8. 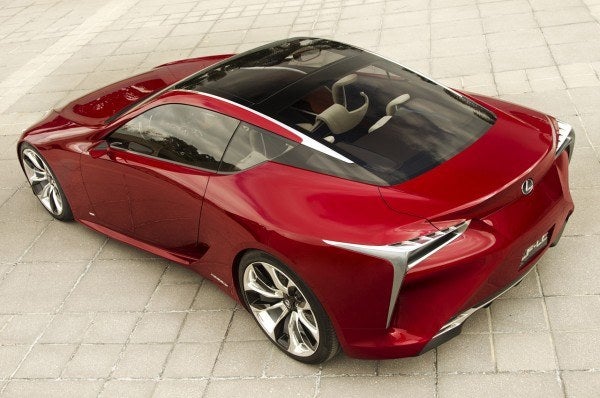 Prior to recent products like the LFA and GS sedan, Lexus hasn’t had much development dollars poured into it. Being too close to Toyota has been a consistent criticism. The Lexus LF-LC Concept was introduced at the North American International Auto Show as a concept emblematic of the new Lexus. A styling stunner inside and out; the reception it received surprised Lexus management.

Quickly after we began to hear noises about Lexus wanting to produce the car. Now, those noises have reached a fever pitch. Automotive News reports that production is a distinct possibility; it will “almost certainly will come to market.”

On track for development, they say the coupe showrooms within three years. Development time takes about 36 months. How quickly it gets here depends on if it can use existing chassis components from the IS-F. As for Lexus itself, they peg the odds of approval at 50-50. Interestingly enough though, dealers were sent a crystal sculpture with a rendering of the LF-LC on it.

It was dubbed the “GS Challenge” and it targets 27,500 sales. AN expects Lexus to move forward with the car whether or not dealers hit that target though, it really is a no brainer. Without the lackluster SC 430, Lexus is lacking a range topping coupe/convertible.

The SC 430 was also developed during a different era; while similar in positioning and price, expect the LF-LC to be far more engaging. Think LFA-lite, says company insiders. We like the sounds of that.