Pardon me for being lyrically poetic but I have just spent a week driving an Audi R8 super car. It has been a fabulous experience as you can imagine. None of your forced induction here; just 5.0 liters of naturally aspirated, ten-cylinder engine power proving once again that there is no replacement for displacement.

That’s it in the image above, out and about in the English countryside, wherein lies the problem.

Great Britain is a small place. Eleven of the U.S. states are bigger. We have a complex and aging infrastructure of roads and most of them are below the standard citizens have a right to expect. Our terrible roads are a result of decades of under-investment and gross mismanagement at local and national levels. Car and road taxes have been siphoned off to fund other often dubious purposes.

From what I hear from America, I imagine there’s a lot of vigorous head nodding going on.

In 2013, the U.K. was the second largest contributor to the European Union pot of gold. Our neighbor Spain, with their huge economic woes, was the second largest recipient of cash in the same year. Around that time I had the pleasure of driving a Porsche Cayman from Motril, on the southern coast of Spain, to historic and beautiful Granada in the foothills of the Sierra Nevada mountains.

The highway was brand new and funded by the European taxpayer – there was a big sign boasting the fact. The magnificent two-lane (each way) blacktop had a surface as smooth and unblemished as Evan Handler’s head as it wound its scenic way into the hills. It was virtually empty and as there were no hot-blooded Spanish traficos to spoil my day, a spirited drive ensued.

These are the roads that make driving a pleasure and bring a sheen of sweat to the brow at the ragged edge of performance. 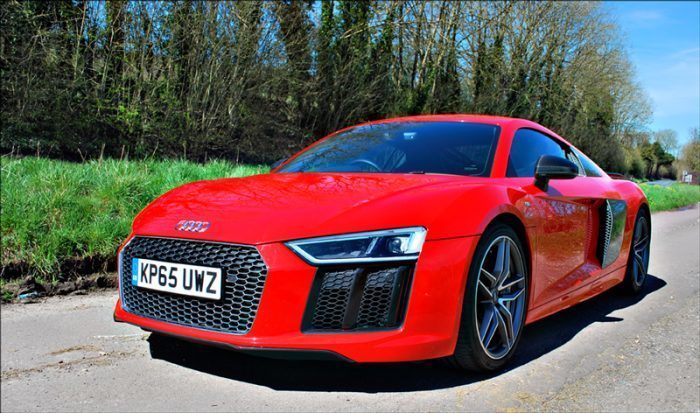 In the U.K., the Brit motorist suffers under a regime of both major and minor roads festooned with potholes; some so big they have their own unique wildlife. Repairs, when they are done, are slipshod and cheap. The first rainstorm sweeps the patches away. I estimate there is not enough money left in the world to do what needs to be done.

Not even Donald Trump could save British roads now.

Around my home town the issue is particularly acute. The space agencies use the roads near me for testing Lunar Rovers, I’ve heard. Even goats fear to tread. Damage to cars can be severe. Aggrieved drivers promptly sue the Highways Agency or the local councils for compensation. This is money that could be better spent repairing the roads thus resolving the problem.

This is why the Audi R8 5.2 V10 plus is the right car for me, but just in the wrong place. The national speed limit is 70 mph and some roads are designated much lower. The Audi can manage over 200 mph with its V10 602 horsepower engine. It has so much torque that it will pull comfortably in seventh gear at forty miles per hour. It is a flexible, functional, and brutal package. In the U.K. it’s the equivalent of $223,000 USD so you really don’t want to put the expensive wheels down a pothole.

Fortunately an alert driver, aided by huge carbon ceramic brakes and precision steering, can avoid most of them. However, there is still the odd heart-stopping moment as the massive front tires thump into a crevice. During my week at the wheel, nestled into the sublime leather cockpit with my best girl by my side, I yearned for the wide open, sun-drenched, speed camera free highways of the Spanish hinterland! I wanted the chance to stop at remote bars and sip a cold beer as the R8 ticked the heat away contentedly at the roadside, attracting admiring glances from dark-eyed senoritas.

I longed to point the aerodynamic nose at the horizon and push the pedal to the plush carpet as my fingers caressed the paddles, and the Audi shot to sixty miles per hour in just three seconds. I craved the red line sweep of the tach and the guttural roar that rises with revs to a banshee scream.

I imagined this could go on forever . . .

They’ve taken it away now and replaced it with a Volkswagen Touran Minivan. How the mighty are fallen. Back to measuring acceleration with a calendar. Back to the school run and the mega-stores. Back to being ignored by the beautiful people. Back to real life and the daily battle on our rotten roads.