Letter From The UK: Snow Way To Carry On

In his latest Letter From The UK, Geoff Maxted examines the phenomenon (and the irony) of why we are still in disbelief every time it snows.

In Europe over the last few days, very heavy snow has fallen in various countries. Mostly these are countries where it happens every year and are thus popular for winter sports, but this year there has been an extreme snowfall. In one location there was over ten feet of the white stuff being cleared from the roof of a school, for example.

On the very morning that I am writing this our national public broadcaster, the BBC, had a frantic morning show host trying to get a man to say how horrendous it was. In fact, he wasn’t that bothered. People were taking it in their stride, he said. They were used to it. It was very funny watching the host try to big up a disaster that hasn’t happened.

Meanwhile, at a winter sport venue in Oberhof, Germany, 21,000 people still turned up to watch a biathlon event, despite the snow and extreme weather. And they all had a lovely time.

Anyone who watched this brilliant Coen Brothers movie will know the story unfolds in the snowy lands of Minnesota. We watch people going about their lives normally on foot and in cars, talking about the weather as they routinely dig out their driveways.

So the USA too gets weather events it seems. I quote John Bacon at USA Today, “A brutal winter storm that dumped up to 20 inches of snow in the Midwest last week roared east Sunday, slamming some areas with up to a half-inch of ice while paralyzing the nation’s capital with several inches of snow.”

Yet American life goes on. Here in this country we can only watch on in awe. Welcome to our world.

At some point every winter, some place in the United Kingdom will get some snow. It’s usually worse in the hills and on the high ground as ever, but we can pretty much be sure we’ll get some at some point. The thing is, despite the fact our wet island, swept by prevailing winds from the north or west, has experienced pretty much the same weather since records began.

Yet every year we are taken completely by surprise.

Tourists from the USA should understand the risks you are taking if visiting our blighted shores in winter time. You could experience – wait for it – up to TWO INCHES of snow. Yeah, now you get it don’t you?

You will find that the country grinds to a halt like rusting machinery. The roads become as rinks with cars flying gaily around like ice skaters on speed. The inability of British drivers to cope with this weather has to be seen to be believed, even though it happens most years. Local councils bring out trucks laden with salt to try and keep the main roads open but they can make no allowance for driving standards.

Related: Winter Driving 101: The complete guide for keeping you and your family safe. 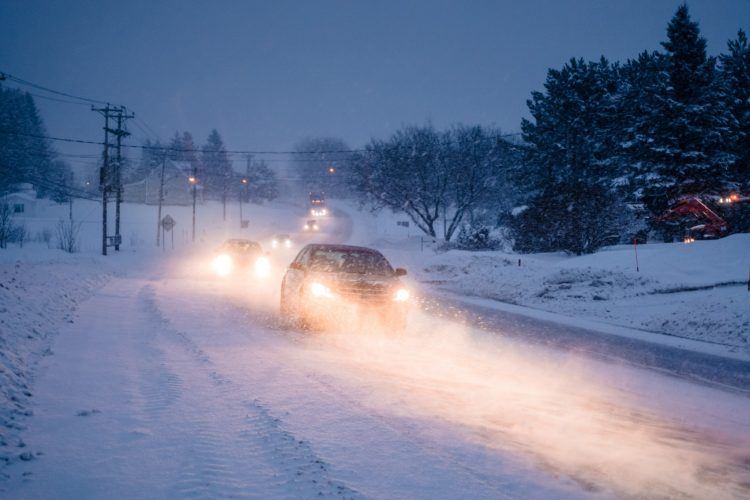 Snow Way To Carry On

People living in the areas badly afflicted by nature’s white blanket must look at us and laugh as they carry on with their lives. We have cars with four-wheel drive, we have winter tires, older folks even have snow chains, yet we still struggle. Learner drivers receive little or no tuition in how to deal with a slide, or cope with adverse road conditions.

Most, in this technological age, have no idea how their cars work.

Inevitably, in those aforementioned snow-afflicted places in Europe and the United States, there are sometimes extreme weather induced fatalities. This is of course a tragedy for those involved. However, what is even more of a tragedy is that in the UK people die on the roads because they cannot drive properly. They need to be better equipped when the weather turns against us, which is quite often this time of year.