This Amazing Car is Built Entirely from Legos

Ok file this under “Coolest DIY project ever.”

Back in 2012, a couple guys had a crazy idea – “Hey, let’s build a car completely out of Legos.” While many of us have hotshot in-the-clouds ideas in the back of our heads, these guys were completely serious about it. And unlike most of us when conceiving it, were probably completely sober.

After getting 40 people to invest in the project, they started design and construction of what they’re calling the Super Awesome Micro Project. What’s that mean?

That means over a half million legos and a fully-functioning, full-size car (a hot rod,) that actually runs…on air.

Check out the cool orbital engine below. You can watch it all move in the video following:

The car was built in Romania and shipped to Melbourne, Australia. It has reached a speed of about 20 mph, and while they say it can go faster, they’re keeping it low because they’re “scared of giant lego explosion” – in their words.

The whole thing is built on standard Lego pieces, including the impressive engine which boasts 256 pistons. Check out the video below: 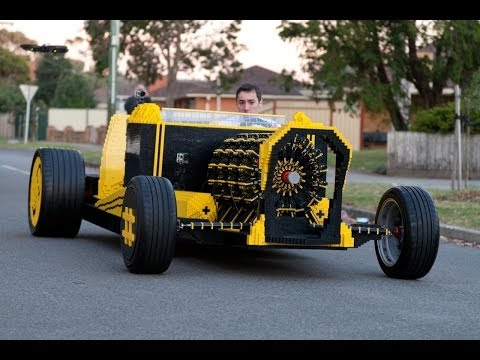