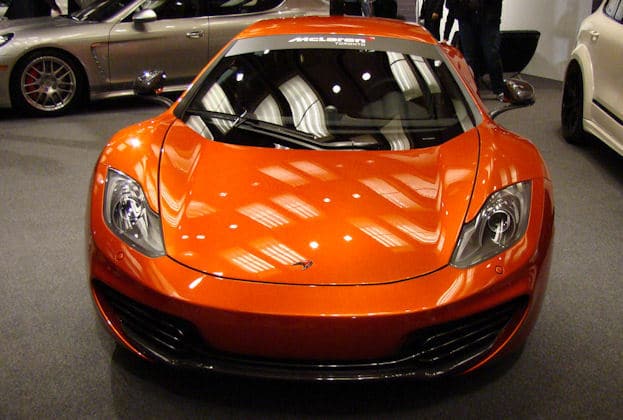 This past February of 2012, the Earth took part in an event occurring one every four years. Given an extra day on the calendar, many of us were propelled by the thoughts for what we should make of the February 29th day. Was it just another day where we go to work and/or school? Maybe it was something more special provoking us to consider the 366th day as the extra time to achieve a special goal.

For me, it called for an automotive-related article that related to this leap year of 2012. Instead of boring some with history of February 29th, I thought the day should operate as a time to recognize some of those high-flying road rockets. The following list is a sample of automotive creations overachieving on four wheels in their effort to redefine the “Leap Year” term: When Volkswagen Group bought the beleaguered Bugatti auto company in 1999, their immediate intent was to develop the world’s most powerful, most exclusive ride. The Bugatti Veyron 16.4 Super Sport doesn’t exist as simply another supercar; it exists as ‘the’ production supercar.

The Bugatti Veyron 16.4 debuted in 2005 as a dream car few people with under $1,700,000 will have the thrill of occupying (let alone drive). The car’s numerical badge identifies the 8-liter engine’s 16-cylinders and four turbochargers. A rare production car presenting horsepower in the four-digit range, the Bugatti Veyron 16.4 initially presented a 1,001 horsepower top-level plateau. In 2011, the Veyron 1.64 Super Sport model larger turbocharging system and improved exhaust allowed up to 1,183 horsepower to bellow under the mid-engined carbon fiber bodywork. The Super Sport package on the Veyron 16.4 supercar upgrades the aerodynamics of the Bugatti with a sleeker profile made possible by the reconfiguration of the air inlets. The combination of the increased engine power and the enhanced exterior design, the Bugatti Veyron 16.4 Super Sport sails to a near 258-mile per hour top speed. An electronically limited top speed in position to protect tires, the Veyron 16.4 in Super Sport trim keeps the Bugatti name in the extreme production car spotlight. Originally, the GT-R lettering was meant almost exclusively for the Japanese marketplace as a designation for Nissan’s high-performance version of the Skyline. However, thanks to the exposure of the sport compact craze in the late 1990s (later the over-exposure in the Fast and the Furious movie franchise), a car like the Nissan Skyline GT-R became too big for one country. Affixing the GT-R badge to a stand-alone high-performance vehicle, Nissan introduced the one of the meanest twin-turbocharged V-6 engines to the global market in 2009.

Three years in the marketplace, the factory has taken a page from the sport compact tuners by adding some extra punch to the 2012 Nissan GT-R. Upping the horsepower from 485 to 530 horsepower chiefly by increasing the turbocharger boost pressure, the 2012 Nissan GT-R is reshaped for an improved 0.26 drag coefficient. Operating on the AT-TESA-E-TS all -wheel drive system, the Nissan GT-R spins Dunlop tires with the efficiency of a top. Missing the ‘opportunity’ to buy Saab in 2009, Koenigsegg decided to maintain their core car business model. A Swedish company surprising the supercar world with a line-up of powerful machines, Koenigsegg has evolved significantly since launching towards development of their first vehicle is 1994 by then 22-year-old founder. Koenigsegg’s latest step forward in creating an adored street demon was the Agera.

Premiering at the Geneva Motor Show in 2010 as a pre-production car, the Koenigsegg Agera will make its arrival as a 2013 model year vehicle. Designed through a “less is more” philosophy process, exterior styling for the Koenigsegg Agera (promoting a 0.33 drag coefficient) insures the supercar gracefully cuts through air. Built on a carbon fiber chassis, the Agera weighs a lean 2,932 pounds overall less vehicle fluids and occupants. Featuring advanced technologies, the Koenigsegg Agera is equipped with a 7-speed dual-clutch transmission, an electronic differential and specially mated Michelin tires. With every refinement, it is the Koenigsegg Agera’s 5-liter V-8 engine erupting as a pure animal. Thanks to twin turbocharging, the Agera rips into the road surface with 960 horsepower.

Preparing for customer sales, the Koenigsegg brand now holds leverage of having the world’s fastest production car. As of late November of 2011, their Agera R supercar recorded a Guinness-recognized fastest 0 to 300 kilometer per hour acceleration taking just 21.19 seconds.

In order to gain a tactical advantage over competitors in Formula 1 and sports car racing, New Zealand-born race car driver Bruce McLaren began building his own vehicles in the 1960s. Making final preparations to join the marketplace during the McLaren race team’s 45th year of competition, the MP4-12C takes the racing-inspired engineering of McLaren back to the streets.

Assembled in the factory that previously constructed the constructed the Mercedes-Benz SLR McLaren supercar, the McLaren MP4-12C is an unhindered exhibition of a small car builder’s effort to create a drive-oriented, high-performance product. Using their long-time expertise in developing carbon fiber for Formula 1 cars, McLaren employment of the exotic material resulted in a monocell (interior surrounding) weighing just 176 pounds. Magnesium and aluminum is also used in the McLaren MP4-12C accomplishing a total vehicle weight around 1,400 kilograms (3,086 pounds). A small displacement V-8 engine matched with two turbochargers propels the rear-wheel drive MP4-12C with 592 horsepower. The well-balanced horsepower and weight insures the McLaren MP4-12C has stellar acceleration and a 205-mile per hour top speed.