Thanks to the evolution in cell phones and the boom of mobile tablets, the current consumer marketplace expects a lot from a small package. Translating to automobiles, a new push by all car manufacturers sees the development of compact vehicles receiving the attention and focus once belonging to a crossover or exotic sports car. Upcoming government regulations and even the motivation of auto companies themselves have seen some impressive numbers coming from under 2-liter engines in recent model years.

For the 2012 model year, the following four engines are desirable four cylinders that no longer represents a compromise to motorists. Besides building up their influence on the North American marketplace, Hyundai is quickly gaining steam as a global automotive player beyond South Korean borders. Striding with the creation of the Tau V-8 utilized on the Genesis and Equus (a powerplant awarded in Ward’s list of the 10 Best engines of 2010), Hyundai’s gained mastery of engine technology was carried down to their entry-level four-cylinder power. The subcompact Hyundai i20 in 2008 for Asia and Europe, the four-cylinder Kappa engine would be the product of the equivalent of $421 million American investment into creating their most refined, small power unit.

Either 1.2 or 1.25 liter in engine displacement, Hyundai’s Kappa in-line four-cylinder engine incorporates many high quality touches including the use of aluminum and stainless steel. The Kappa’s aluminum engine block weighs less than other manufacturers in the compact car class. A double overhead cam powerplant, the valves in the upper area of Hyundai’s Kappa engine actuate with beehive-shaped springs providing lower friction. Also reducing resistance, Kappa powerplant piston rings and skirt are coated with a thin layer of anti-friction material.

Acting on reducing common consumer complaints that smaller, compact car engines are generally noisy and run with less finesse than larger powerplants, the Hyundai Kappa powerplant’s work for improving fuel economy also involves improvements for vibration as well as noise reduction. A new belt design and a silent-type timing chain insure driving the Hyundai i10 as well as i20 compacts is refreshingly subtle. Introduced as the new powerplant for the Audi A5 Coupe, a smaller 170-horsepower TFSI gasoline engine has been devised to meet stricter emission and fuel economy standard. 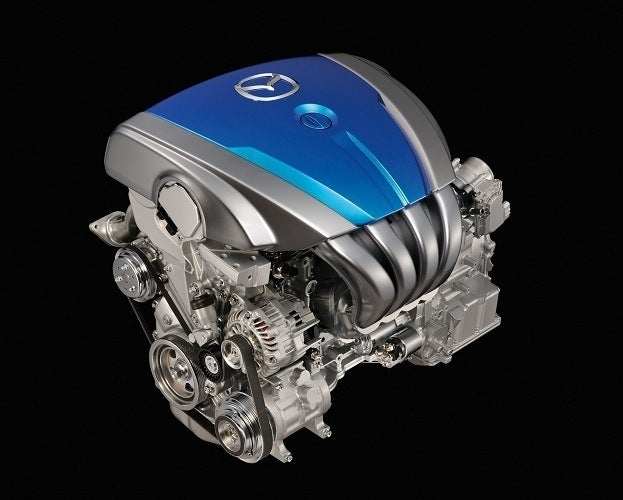 Rather than basing their company’s future on a hybrid and all-electric vehicle, Mazda is promoting their SkyActiv technology philosophy. Designing vehicles around lighter, more mechanically efficient components, the SkyActiv-G powerplant debuting to American in the 2012 Mazda3 is a pivotal item to the Japanese auto company’s upcoming fleet.

Unlike many high compression engines, the SkyActiv-G engine can run at peak power on only regular unleaded gasoline. Establishing a technological edge in powertrain technology American automakers rarely accomplished with six-cylinder engines, the stir Ford has created with their Ecoboost technology compared to that of a Mustang GT 5-liter V-8 or their Escape Hybrid. Carrying over the lessons learned with the V-6 engine, Ford has downsized the Ecoboost technology with newly arriving four-cylinder vehicles.

Said to be the first global use of Ford Motor Company’s advanced engine technology, the 2.0-liter Ecoboost arrives to the United States in the 2012 model year on the Edge and Explorer crossover vehicles as well as the sport compact Ford Focus ST. Featuring the assistance of a single turbocharger, the 2.0-liter Ecoboost engine performance is maximized from the small displacement through gasoline direct injection and Ford’s TI-VCT (twin independent variable camshaft timing) system.