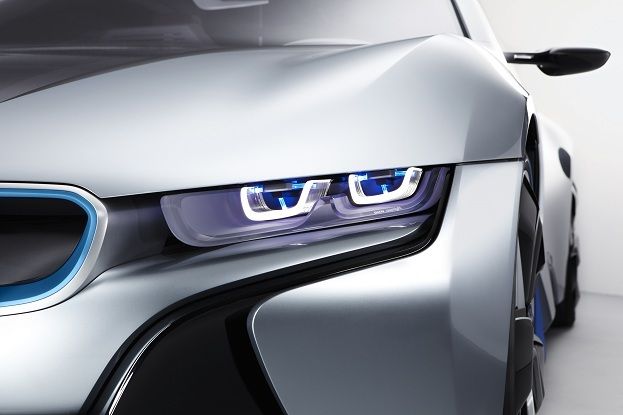 Since Thomas Edison perfected the electronic light bulb over 130 years ago, our ability of creating artificial illumination has brightened up the coldness of night. An evolution especially important as the automobile progressed, vehicle lighting has taken strides in becoming brighter and more efficient. At first existing as clumsy lanterns, electric lighting quickly emerged in the time of the motor vehicle reach global acceptance. From tungsten to halogen headlight bulbs, the recent phase apparent is HID (High Intensity Discharge) which uses xenon gas to bring a near perfect white light to the road at about one-third of the power needed for a halogen setup. However, as HID headlamps are coming of age, a new challenge coming from full LED lighting systems (equipped on the Audi A8). Appearing that a competition between HID and LED headlamps is now foreseen on the horizon, a future automotive lighting solution could be found in lasers.

Sounding like something from a space fiction movie, two auto companies ahead of the 2011 Frankfurt Motor Show flooded the idea of super-powered vehicle lighting. BMW as well as Audi debuted concept cars expressing, among many potential design and technology themes, laser-based lighting.

Creating a more stir with their BMW i division, the Stuttgart-based automotive powerhouse BMW brought the upcoming brand’s concept vehicles to Frankfurt exhibition. Displaying the i3 and i8 concept cars, the latter BMW design incorporates the shining innovation of laser diode headlamps. Embodied in a styling reminiscent of BMW design DNA and the new electrified vehicle image the German auto manufacturer seeks to advertise, the laser lights projected a blue aura of 1700 lumens. While producing a light as much as a thousand times brighter than a LED, the BMW i8 Concept’s laser headlamp layout claims to operate with under one-half the energy of a comparable LED setup.

While the BMW i concept car lured much of the attention by projecting a future where laser diodes will be trusted upon for primary lighting, Audi’s A2 Concept also presented the advantages of laser illumination. Part of the electrified concept car’s comprehensive range of lighting, the Audi A2 show vehicle features a rear fog light consisting of laser diodes. Perhaps lost in the flowing arrangement of LEDs on the Audi concept car, the red triangle lit by laser-produced was promoted as a powerful warning light for following vehicles. In concept form on the BMW i8 and Audi A2 at the Frankfurt Motor Show, the first major automotive display of laser lighting could pose a road to production that far exceeds the projection of brightness. A major task guaranteeing the widespread application of laser diode lighting rests in calming public perception behind this particular kind of artificially generated light. The reckless uses of certain lasers have made fears the radical headlight beams can cause harm to those exposed. On the system exhibited on the BMW i8 Concept, the auto company quickly pacifies safety concerns by insuring that the pure laser light is not emitted from the headlight system. When the laser light is created, a fluorescent phosphor material processes the brightness into a safe, usable light for the road.

Another challenge in the United States has been the relatively slow adaptation of new technology compared to other world markets. As Asian and European countries allowed the aerodynamic glass and plastic covering over headlights since the 1960s, United States automotive safety bodies rejected the intentions to bring the more stylistic illumination solution. It was not until 1983 when the US Department of Transportation finally permitted automakers to depart from the traditional sealed beam light bulbs. Later in 1997, the first American car to feature HID headlights was Lincoln Mark VIII came 7 years after BMW’s debut of the lighting solution on European 7 Series.

Converting dark into light, the importance of recognizing the best in automotive illumination will ultimately favour the everyday motorist once the conceptual stage is traveled. It will be seen if laser diode lighting will throw light on the roadways of the future.