Lamborghini at the 2013 Geneva Motor Show 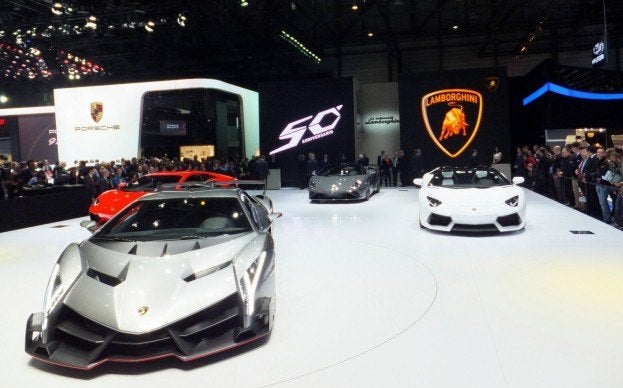 We certainly don’t need to tell you what Lamborghini was up to this year at the Geneva Motor Show. If you haven’t heard about the Lamborghini Veneno yet, where have you been? for a quick overview, the Veneno – of which only three will be made – uses the Aventador’s 6.5-liter V12 engine tuned to 750 hp. They’ve managed to cut the weight down to 3,190 lbs, which is lighter than a Honda Accord, allowing the car to reach sixty from zero in only 2.8 seconds and move on to a top sped of 221 mph. How much do the three lucky buyers have the privilege of paying for such a machine? Just under $4 million a pop. Lucky them.

Aside from the Veneno reveal, which stole attention from all the rest of the show, the flamboyant Italian supercar maker displayed three other current models sitting alongside the new one.

At last year’s Geneva show, if you remember, we got to witness the unveiling of the Lamborghini Aventador J Concept (that’s Jota, or “yah-tuh”,) which was the precursor to the new Aventador Roadster, of which we see an extremely white version sitting to the Veneno’s left: Not quite as fun to look at as the Aventador J Concept, but a tad more reasonable to drive and own, I would imagine: To the Veneno’s right sits the regular old Aventador LP 700-4, which is still quite impressive to look at in person, and in the back, the new Gallardo LP 560-4. Take a look below for the photo gallery of all the pictures I took at the Lamborghini stand this year, along with a couple other Lambos at other booths around the show: