Say hello to the fastest and most powerful Jaguar sedan ever. And, it gets 23 miles per gallon to boot. No gas guzzler tax – imagine that! Striking blue is beginning to become a color associated with Jaguar. Who would have thought? With the XKR-S, Jaguar entered a new phase of its performance program. It’s almost enough to make us forget about the Ford years. Last week, Jaguar teased the XFR-S for the first time.

The XFR-S is a car we’ve heard about coming for quite some time, so we knew what to expect, but that doesn’t make it any less cool. Looking like a four-door version of the XKR-S, the XFR-S comes packing the same power plant – a supercharged 5.0-liter V-8, making 550 horsepower and 502 pound-feet of torque. 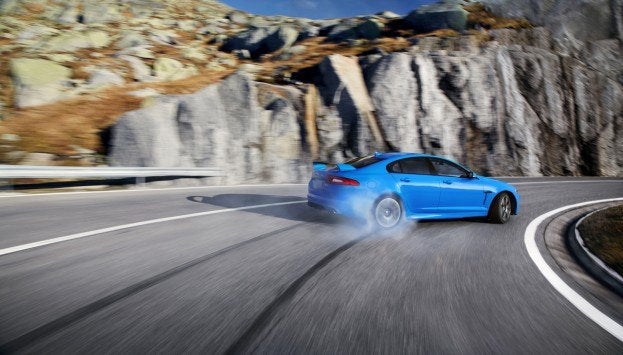 It is mated to an 8-speed ZF transmission with Quickshift functionality. That is enough to push the car to 60 mph in just 4.4 seconds. This is the car for those who think the XFR just isn’t enough. The XFR-S is much more than just a power upgrade though. It includes a host of other changes, both visually and under the skin. Huge 20-inch “Varuna” forged alloy wheels with wider tires make a big statement.

The exterior bodywork is much more aggressive, so you’d be forgiven for thinking it’s just for appearance, but it isn’t. “The Design Team was very conscious that it would be the aerodynamic solutions required to deliver the performance of the XFR-S that would dictate its aesthetics. This is a concentrated and focused car and the design revisions and the materials used all reflect that” says Wayne Burgess, Studio Director, Jaguar Design. Carbon fiber pieces such as the front splitter, extended side sills, and aero blade molding, reduce exterior lift by sixty-eight percent.

Under the skin, an upgraded front and rear suspension increases lateral stiffness by thirty percent. If you want an XFR-S, you’d better get in line. Jaguar says it is only available for the 2014 model year, and that just one hundred will be ear-marked for the U.S- market. Delivery will begin in summer of 2013 with a price tag starting at $99,000.