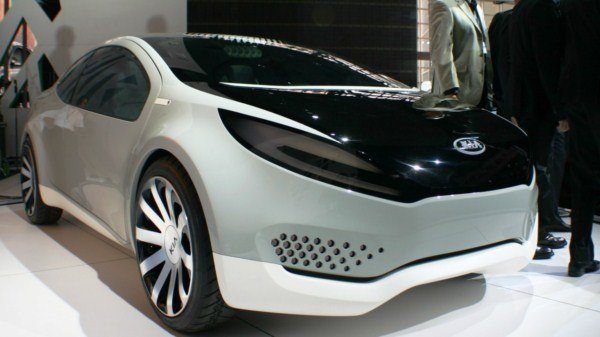 At what was without question the best press conference of the 2010 Chicago Auto Show, Kia unveiled their newest concept car – the Kia Ray Hybrid Concept. The plug-in hybrid is a four-door but coupe-like body that uses lightweight and recycled material along with a roof-top solar panel embedded in the glass roof. The solar panel powers the lighting and climate controls much like the current Toyota Prius, and does not charge the vehicle’s batteries.

The Kia Ray was designed to break away from the current hybrid design trend, which makes everything look awkward. Glance at the Toyota Prius, Nissan Leaf, or Honda Insight and you’ll see they look very similar in shape; something Kia didn’t want to be a part of. Kia wanted to develop “something that you wouldn’t feel embarrassed driving, but actually feel proud to be seen in.” Airplanes were used in the design process for inspiration, Kia says, using the “less is more” rationale,designing so that everything is there for a reason. “The body side section has an uncommon curvature that gives the car a fuselage like appearance and increases aerodynamics. Rear fenders and spoiler slide back to improve the overall Cd at higher speed.” Typical concept features – motion-detecting cameras and front driving lamps that open up when the gasoline engine is being used – are present but will not likely be on a production model. A new “cool car” technology is being used in the Ray Concept which includes nano-laminate films and cool-glazing material to reduce solar heat. The roof-top solar panels power an interior cooling fan to keep the inside from getting too hot.

The interior design of the Ray is sexy, using an open-air design and lightweight recycled materials. The sexy touch-screen instrument panel obviously won’t make it into production but is a great concept. The Kia UVO system is implemented into the car, giving owners a personalized “infotainment” experience. White leather and wool felt is used to create an “earthy” and open feel to the interior, and a honeycomb design is used throughout the cabin for strength, weight savings, and to tie the theme together. Mesh is used in the door inserts and seats and a lightweight alternative. 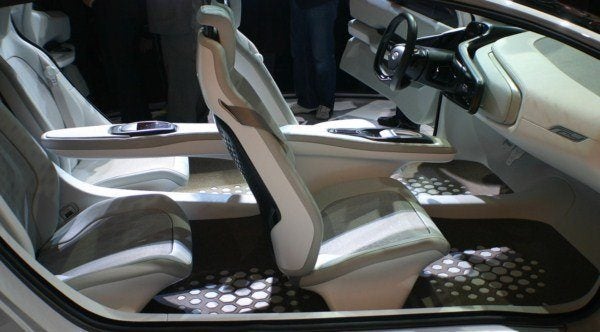 Kia says the Ray Concept can get 77.6 mpg in regular hybrid mode, and 202.3 mpg when in plug-in mode. They expect the car to have a range of 746 miles before you need to fill up, which is pretty damn good.

The Kia Ray Hybrid is more of a design concept than anything else, since the powertrain and technology offered don’t give us anything special. This is still important, since it proves you can have a good looking hybrid car that is still very aerodynamic. The Ray Concept’s coefficient of drag (Cd) is 0.25, which ties the 2010 Toyota Prius – the slipperiest car currently in production.