We drivers are a fickle lot. We tend to gravitate towards a certain car make and model, and it is the same for our radar detector. I’ve owned various brands over the years, such as Whistler and Cobra, but always favored Beltronics. And lately, I was eyeing Escort and Radenso.

But the radar detector fairy had other plans.

Recently, K40 Electronics reached out to us to review their RLS2 Radar & Laser Detector.

I was pleasantly surprised when I received the box containing the K40 RLS2. The detector and accessories were well packaged and came with two power cords: a straight cord and a coiled one. Thank you, K40, since I have a car and a truck.

This gives a new meaning to portable and light.

Inside the manual’s cover was a note stating: Don’t like to read manuals? Call our experienced consultants with the toll-free number written below it. This gives you direct access to something called the K40 Consult line. Wow! Not to generalize, but males aren’t too good at reading manuals. Women are much better at it, but it’s a small booklet with fewer than 20 pages and many graphics. And there’s a neat, spill-proof reference card to keep with your unit.

Personally, I don’t like mounting the unit on the windshield. I want a clear view when I drive. No garland hanging from the mirror. No bobble hula dancer on my dash and no stickers on the glass. And If your car sits in the hot summer sun, the suction cups might not “stick around” for too long. That being said, you get optimum efficiency if the detector signal is unencumbered. If the detector sits on the dash behind the wiper blades, the unit may not perform up to specs. Since two cords are supplied with the unit, I would recommend to the good folks at K40 Electronics to supply a second clip with a rounded end that would slide over the visor. The straight cord is long enough, but the suction cup clip, designed for the windshield, does not work for the visor.

A clip designed to stay on the visor would be perfect. I’ve had such a visor clip before, where I ran the cord between the steering wheel and the dash, along the corner molding, and up to the visor. It worked great. No doubt most manufacturers spend quite a bit of time developing their products, and it is likely the same for K40 Electronics. 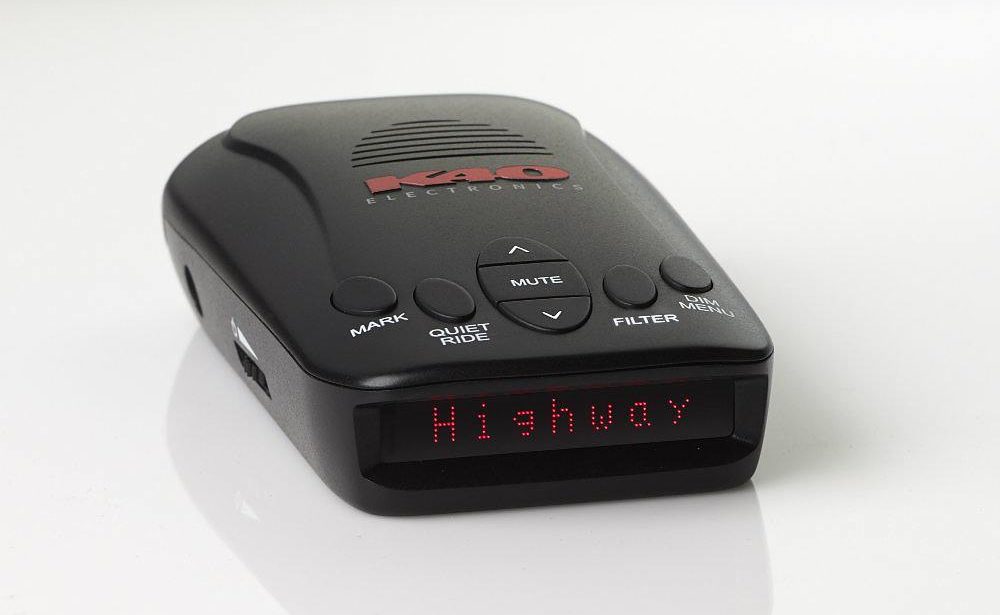 The Ticket (Or Not?)

Radar detectors have saved me quite a bit of money over the years. Not that I’m condoning speeding, but sometimes you travel on an open road for miles on end, with little or no traffic, and you want to get where you’re going. Years ago, I was driving along, minding my own business, when a highway patrol car appears behind me. They have a way of sneaking up on you. He is not tailgating, but he is not far either. He follows me for a while, and then the cherry lights come on.

I pull over. The officer gets out of the car. He’s like 6’4″, 300 lbs. All muscle. His partner is younger and lankier. He doesn’t say much and stands further behind, looking at my car. The bigger officer says, “we know you have a radar detector, and they are illegal here.”

I had no choice but to reply, “yes.” I had no jammer or scrambler. “You have two choices. You voluntarily hand over your detector and sign our form stating that you forfeit the device. Or, we take the detector and give you a ticket. Then, you can go to court to fight it and try to get your device back. It’s your choice.”

Of course, at this point, the officer is getting bigger, and I’m getting smaller. It’s amazing how you regress when you’ve been caught with your hand in the cookie jar. And now he wants to take away my blankie. I voluntarily gave him my detector and signed the form. The irony is that I was driving within the speed limit.

Always check local and state laws to ensure your use of a radar detector of any brand is legal. However, should you find yourself in hot water, K40 offers a ticket-free ownership experience that may save you. Under certain conditions, if you receive a ticket within the first year of ownership of a K40 product, they pay the ticket for you. K40 Electronics is the first radar detector manufacturer in the world to offer this sort of guarantee.

The K40 RLS2 is a higher-end unit and offers better long-range detection. It also has a GPS feature that will remember the radar frequency at a particular location and alert you the next time you drive by. It also includes a K-band filter for those annoying false alerts, especially in heavy traffic. Cars today have so much other radar-based technology, but the K40 RLS2 can easily decipher between real radar and a false alarm.

Entry-level detectors rarely work unless you use them in a straight line with nothing in the way between you and the radar. Even then, they give you little or no time to react when the unit does detect a radar gun, and they can commonly pick up those annoying false alarms. Break your piggy bank and treat yourself to a K40 RLS2 at a dealer near you. You will be pleasantly surprised with its many features, top-notch performance, and up to 13 customizable settings for individual drivers.

I just hope that you don’t have 13 drivers in the family using the same car.

Check the latest price for the K40 RLS2 on Amazon here.

For other options, check out our buyer’s guide for the best radar detectors on the market.