It was May of 2006, my 1995 Maxima’s check engine light came on. The car had plenty of body problems but had run great in my three or four years of owning it. The only thing that had needed replacement over that time was the idler pulley. I knew the car was ten years old and was about due for a slew of problems to hit. So, after a few years of driving in Iowa, I knew winters kind of sucked if you had two-wheel drive. I really enjoyed driving and wanted to own a manual transmission for the rest of my life. I think it connects the driver to the car in a way automatics don’t do. So there were my two main qualifications: clutch car and all-wheel drive.

From there, I hit the web. After conversations with a very happy Subaru owner, I thought I’d check out their site. I really liked the WRX since it had enough power and didn’t really scream, “Rice me out!” So I sent a dealer inquiry through their site. I got a response a few hours later from Jim Miller Subaru here in Cedar Rapids. He said they had a shiny new 2006 STi in stock, and I could come down at any time to check it out. I grabbed my parents since this would be my first major purchase in life, and we went out that night to do some test driving. The STi was the first one we got in. Interestingly, they didn’t keep the shift knob with it; the salesman said it was a theft risk. So we got in and started it. The car had a rumble that warmed the soul. I was a bit taken back by the wing that followed me while I drove, but the car was amazingly responsive and had loads of power. Next, I got in the WRX. Well, the STi was a six speed, the WRX was a five speed. It had a quieter cabin but didn’t talk to me like the STi did. So, I thought about it for a couple of days, then went down that Saturday and picked up an STi with 19 miles on it. Payments were $670 a month, but that was fine since I was single but dating and had minimal expenses. Also, my interest rate was a really low 4.9% because of some college graduate deal Subaru had going at the time.

Life was great; I drove the car everywhere, including a trip to south Texas and back. People asked how my teeth were after the trip. The car had performed marvelously and was the easiest long trip I’d ever taken. To put it succinctly, I loved my car. I was a proud papa, and it was my child. My wife and I married that August. Things really changed in March of 2007 when we found out my wife was pregnant. It was early May when I ran the numbers on upcoming bills, and the STi was a huge drain every month, especially when my wife stopped working after the kid was born. That and the stupid jokes about having a kid in the car were dumb. C’mon guys, come up with something that’s actually funny. So I called the same salesman at Jim Miller up again and asked him what my options were. They had a 2007 Legacy base model in stock, and with the $1500 incentive to buy, I could help cover up my negative equity in the car. Well, I looked at it, and the color was awful, even my wife didn’t like it. A couple of days later, he called me back and said they’d just gotten in a 2006 Legacy GT Limited. It was an automatic, but I got to keep the turbo, and it had a lot of nice features like heated seats, leather, and a defroster under the wipers, which helps in Iowa winters. So I picked it up and lowered my payments to $512 a month. I traded the STi in one year to the day from when I got it, along with the winter wheels I’d picked up, with a tear in my eye. 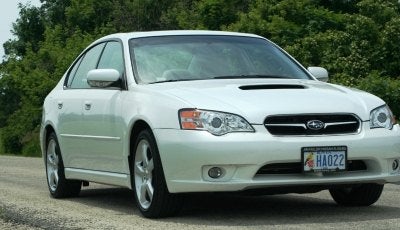 The interesting side story is, on July 3rd, we were on our way back from lunch and had just pulled out of the apartment building in my wife’s ’97 Stratus (which was nearly paid off). We were hit doing no more than 20-25mph. Her car ended up getting totaled. So we had to find something new for her. Even with the money from insurance, there’s another $210 outgoing a month on cars, so we were behind where we were before. Maybe it was a good idea to get rid of the STi after all.

So here I am with a car with lots of power that can zip through traffic and is comfortable to drive, but it’s missing something. I don’t enjoy going for drives in it, and the car and I have no connection. It’s a way for me to get from here to there. Okay, so I don’t have to put super premium 93 octane in it (and there’s only one station in town with that) since it takes normal premium. It doesn’t save that much overall, really. The deal where it’s got all-season tires sucks. They suck in every season. All-wheel drive is nice, and this car has the ability to pull away from an icy stop with ease. So why am I looking for a new car? If this one is so nice in just about every way, what’s wrong with it? Like I said, it’s not fun to drive. So a week ago, I called the local BMW dealer (Mark Zimmerman) to inquire about a 325xi/328xi/530xi with a stick in it. After going down and him looking at my current car, he said they’d definitely like to do business with me. They didn’t have a car in stock that met my requirements that day, but if I could give them a couple of weeks, they’d get one in. Or take the M3 that was sitting there. Right. I’d like to get my payments down further, but if that’s what’s there, I’ll take it! Just kidding. So now, I’m waiting for a callback on what I hope to be my final family sports sedan. Until I can afford a 335xi.