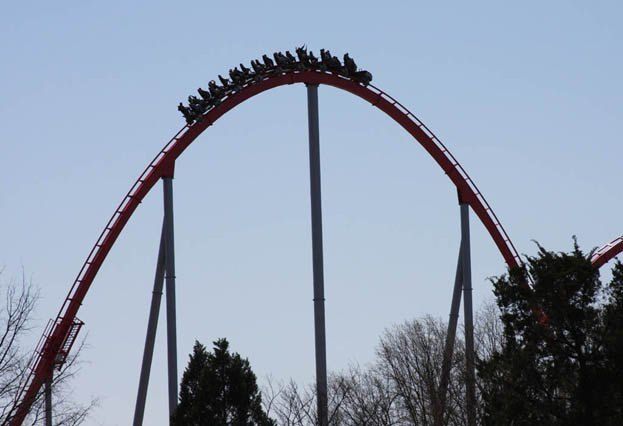 In some ways, this is as surprising as Sarah Palin’s “viability” for elected office. Well of COURSE someone was going to make a rollercoaster that had something to do with NASCAR or, in this specific instance, Dale Earnhardt.

The coaster, dubbed The Intimidator (natch), bills itself as ” … the fastest, tallest, and longest roller coaster in the Southeast.” The irony of it only being the most impressive in a regional sense was not lost on me.

The Intimidator is more than a mile long, is 232 feet high and drops 211 feet in one big go and is located at the Carowinds theme park. Riders of The Intimidator hit 80 miles per hour in rollercoaster cars that are made to look like the #3 Chevy Monte Carlo driven by Dale Earnhardt. Only the cars on the coaster have more than one, cramped, Kirkey seat, and they are set up in a stadium seating style so that everyone gets a clear view.

The cars are also bolted to the track, as are all rollercoaster cars.

Which is why I find rollercoasters boring.

Sure, you’re doing these big drops, and hitting fairly high speeds and pulling some occasional elevated Gs, but the damn things are bolted to the track. You can look out in front of you and say, “OK, looks like I’m going to be making a left in a few seconds.”

That’s way different than driving your own car in, say, an SCCA rally, where you will be hitting fairly high speeds and pulling some occasional elevated Gs, and you can look out in front of you and say, “OK, looks like I HAVE TO be making a left in a few seconds.”

It’s a totally different thing when YOU have to control the car, and if you don’t, THEN you are on one hell of a ride governed by Dr. Newton and ending with you in a hospital or worse.

The only thing that would make The Intimidator truly interesting is if one of its troglodytic riders where to pull some sort of stunt that caused him to snap his neck and end up winning a Darwin Award.