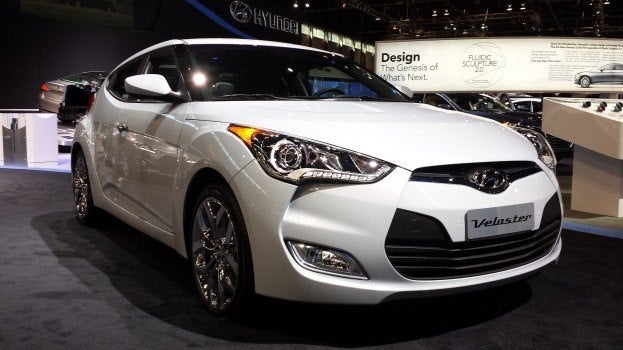 Fundamentally, what we have here is a regular Veloster with much of the car’s $1,800 Style Package and some Turbo-only features as standard. It’s the Veloster for those who want the perks of a Turbo without paying for the Turbo badge. Audiophiles will be pleased not to pay Turbo prices for RE:FLEX’s 450-watt Dimension premium audio system with eight speakers and subwoofer.

The RE:FLEX will use the same 1.6-liter, four-cylinder motor as on normal Velosters, but it’ll come standard with six-speed EcoShift dual-clutch transmission, something that’s normally an option.

Customers will have five colors choices: Century White, Vitamin C (orange), Ultra Black, and Boston Red. Only one color is exclusive to RE:FLEX: Ice Pearl. It’s too bad those are the only choices. Special editions like this are excellent opportunities to offer colors not on Veloster’s palette, such as the Genesis Coupe’s Tsukuba Red or Ibiza Blue, or something crazy to add to the car’s exclusivity.

Pricing hasn’t yet been announced, but the manual transmission RE:MIX started at $20,845. Since RE:FLEX is the same idea, I’d expect it to be in that ballpark. If you’re interested in the RE:FLEX, you’d better pounce quickly. Only 3,000 units will be built when it hits dealers in the spring.