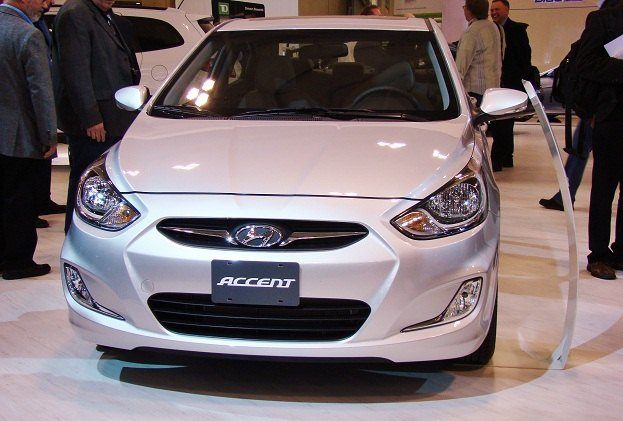 As much as Hyundai Motors has been making substantial moves in advancing their vehicle quality, design and technology, it could also be said that the automotive market has come to the South Korean company. Particularly in the United States, new car customers are more open to explore the variety of value-priced vehicles that do not skip on standard features. As the Hyundai brand steered themselves to recognition as more than just a low-cost vehicle provider, the introduction of vehicles like the Genesis, Equus and the Elantra is showing observers we can truly expect more from the automaker. Drastically revamping their entire vehicle line-up, one remaining product of the old Hyundai regime was the entry-level Accent. With some considering their small car the weakest link to an enthusiastic line of fresh vehicles, the brand new 2012 Hyundai Accent will truly bolster the strength of the chain.

Riding on a wheelbase 2.8 inches longer than the previous subcompact model, a GS or SE trimmed five-door and a GLS level four-door body style will inaugurate the 2012 Hyundai Accent. As many could expect, the Hyundai Veloster unveiled earlier provided a strong hint to the future Accent. Comparably, 2012 Hyundai Accent’s styling expresses itself in a more polite manner than the aggression of the Veloster. Smaller front grille openings and the additional available fog lamps on the SE and GLS models are defining differences between Hyundai’s new entry scale. As the headlamp housings flow gracefully up the front quarter panels, the side of the 2012 Hyundai Accent wears sharp contours. Wheel sizes between 14 to 16 inches will be found as part of factory preparations for the new Accent where four-wheel disc brakes and anti-lock braking will be equipped fleet wide on the 2012 model year vehicle. Tire pressure monitoring system, electronic stability control and Brake Assist are all standard safety items for the 2012 Hyundai Accent.

While the 2012 Hyundai Accent was released with all specifications and details at the New York Auto Show, the more mature subcompact had been making appearance along the recent international auto show tour for 2011. Personally, I was introduced to the 2012 Hyundai Accent at the 2011 Canadian International Auto Show. Able to get a good look at the upcoming five-door hatchback model (and informed about the planned four-door model), the remaining details were still sketchy on the new Accent. 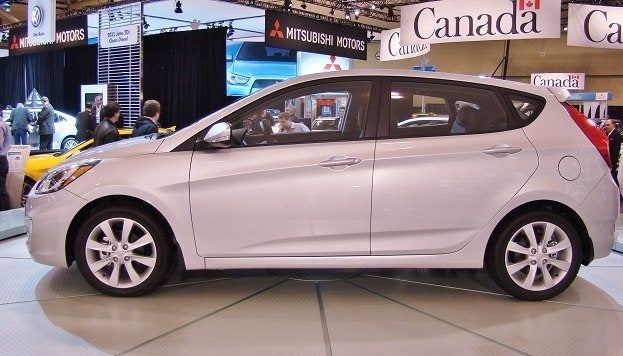 Within the surface area of the enlarged frame, modernization of the 2012 Hyundai Accent sees the inclusion of a cutting-edge small car powertrain. Starting with a 1.6 liter inline-4 engine, the Accent will move with the perk of 28 new horsepower over the previous Hyundai subcompact car. Totalling to 138 horsepower, Hyundai’s 1.6 liter Gamma engine involves gasoline direct injection and dual continuously variable valve timing. A definitely more sportier powerplant is complemented by an advanced assortment of gearboxes. While the outgoing Hyundai Accent made do with an aging five-speed manual and four-speed automatic transmission choice, the 2012 car features the two transmission types with 6 speeds. Insuring improved power delivery while driving, fuel economy is also enhanced. The new Hyundai Accent five-door promises runs of 34 miles per gallon with the manual gearbox and 33 miles per gallon when equipped to a 6-speed automatic. A Hyundai buyer of the 2012 model year Accent will receive at least a 3 mile per gallon improvement over the 2011 car.

2012 Hyundai Accent’s larger wheelbase does not necessarily translate to additional passenger volume but both the four and five door models are welcoming as well as comfortable with a new interior layout for up to 5 passengers. However, cargo space is increased to class-topping quantity over other five-door compact competition for 2011. Inside all 2012 Hyundai Accents is 6 airbags, power door locks and 60/40 split rear seating. Bluetooth will also be introduced to the Accent in 2012 bringing it in line for almost every modern vehicle. So far, no price has been confirmed for the 2012 Hyundai Accent models but expect some of the lowest new car prices for the model year. Unlike the introduction of the previous Accent, Hyundai’s 2012 car is entering into an automotive dogfight over the subcompact vehicle category. The Ford Fiesta and the upcoming Chevrolet Sonic are only a few new entrants increasing the stakes in the North American compact car segment. It will be up to the 2012 Hyundai Accent to properly register the language of current American motorists.