Hybrid technology in modern cars, whether you agree with it or not, is here to stay.  While many  manufacturers have delivered hybrid cars built upon existing platforms, two companies have stood out in the development of hybrid specific rides;  Toyota with the Prius and Chevrolet with the Volt.  While these two rides are not the only hybrid specific on the road today, they do stand to compete with each other in every way.

Heading into its third generation, the Toyota Prius can now be had in three different versions, designed to bring a bit of versatility and updated looks to the line.  In this test, the Prius tested was the standard version with the common design carried over from the previous generation. Inside this updated Prius is an updated dash, with a great center console coming out of the dash, offering a more familiar car feel while driving.  The center information center is still present, but is updated as well with more information and a better layout that keeps the driver’s eyes focused more on the road.  The heads-up display on the glass also provides the necessary information necessary for safe and economical driving.  Overall, with the more conventional dash space and common driver controls, the update is a step in the right direction for the Prius.

The 2012 Prius is powered by a 1.8 liter gas engine connected to Toyota’s Hybrid Synergy Drive, allowing the car to be powered up to 30 mph on electricity alone.  The combination drives the car with a total of 134 hp, allowing it to get to 60 under 10 seconds. The rest of the styling of the Prius is very clean and updated, especially over the aging design of the previous generation.  What has been described as ‘space age’ the Prius brings new headlights and tail lights, as well as great driver assistants that allow the driver to focus more on driving than fidgeting with the systems.  The navigation is still a bit outdated compared to other vehicles on the road, but is a bit faster in transitions than most. Its domestic competition comes courtesy of Chevrolet, with the introduction of the Volt in 2011.  This vehicle, a plug-in hybrid, is a different vehicle than the regular Prius in that it will run on pure electric up to 100 mph for up to 50 miles without a drop of gasoline.  After the battery runs out, the gasoline powered 4-cylinder motor kicks in, powering the Volt for another 300 miles.

The styling of the Volt is very updated modern, from the outside in.  The design is very sleek and aerodynamic, with big glass all around for great visibility.  The lines on the body are swooped back, which carry over inside the cabin for a continued modern look.  Unlike the Prius, the interior of the Volt is not necessarily trying to reinvent the modern car, but provide updated and futuristic touches to show the direction cars are headed without breaking the comfort zone of many everyday drivers. 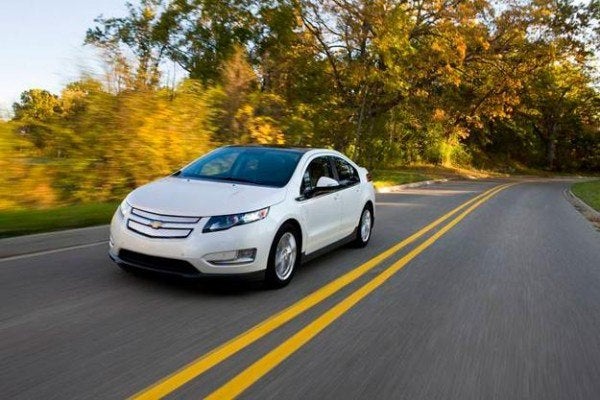 From the touch dash, with no physical buttons on the dash, along with the HD screen in showing power consumption and general driving information, the cockpit is extremely comfortable and filled with just about every bit of information necessary in a hybrid.

The rest of the vehicle is laid out nice and comfortably, and while the back seat is a tad cramped, the front seats are sporty in their feel, continuing on the sleek styling.  Unlike the Prius, the materials inside the Volt feel normal, not specific for the hybrid, and bring an upscale feel to the whole ride. So with all that in mind comes the  question of which is a better buy when in the market for a hybrid car.  The 2012 Toyota Prius has a long standing reputation behind it, heading into its third generation, while the  Chevrolet Volt is only in its first 2 years of life.  For some, this might seem like a risk as the Volt has not had time to mature on the road, but honestly, it is refreshing as the Volt brings known technology to the table in a platform that is both realistic, futuristic, and good looking.

Ride quality is much better in the Volt as well, with its handling and acceleration characteristics much more in tune with regular sedan, while the Prius feels lagging off the line.  One major advantage the Volt has over the Prius is engine noise as well, with very little heard inside the cabin whenever it was on.  The opposite is true with the Prius, especially under acceleration when the engine produces a high-pitched sound comparable to an over revving, underpowered lawn mower. Overall, even with all the development that has come with the Prius over the past decade, it still feels behind the curve, especially with the Volt on the market.  The Volt provides a more natural feeling to the driving experience, while the Prius seems to be attempting to reinvent the whole concept.  And while the Prius is successful, it’s only a stepping stone into the direction it needs to head to keep up with something and fulfilling, and honestly fun to drive, as the Volt.