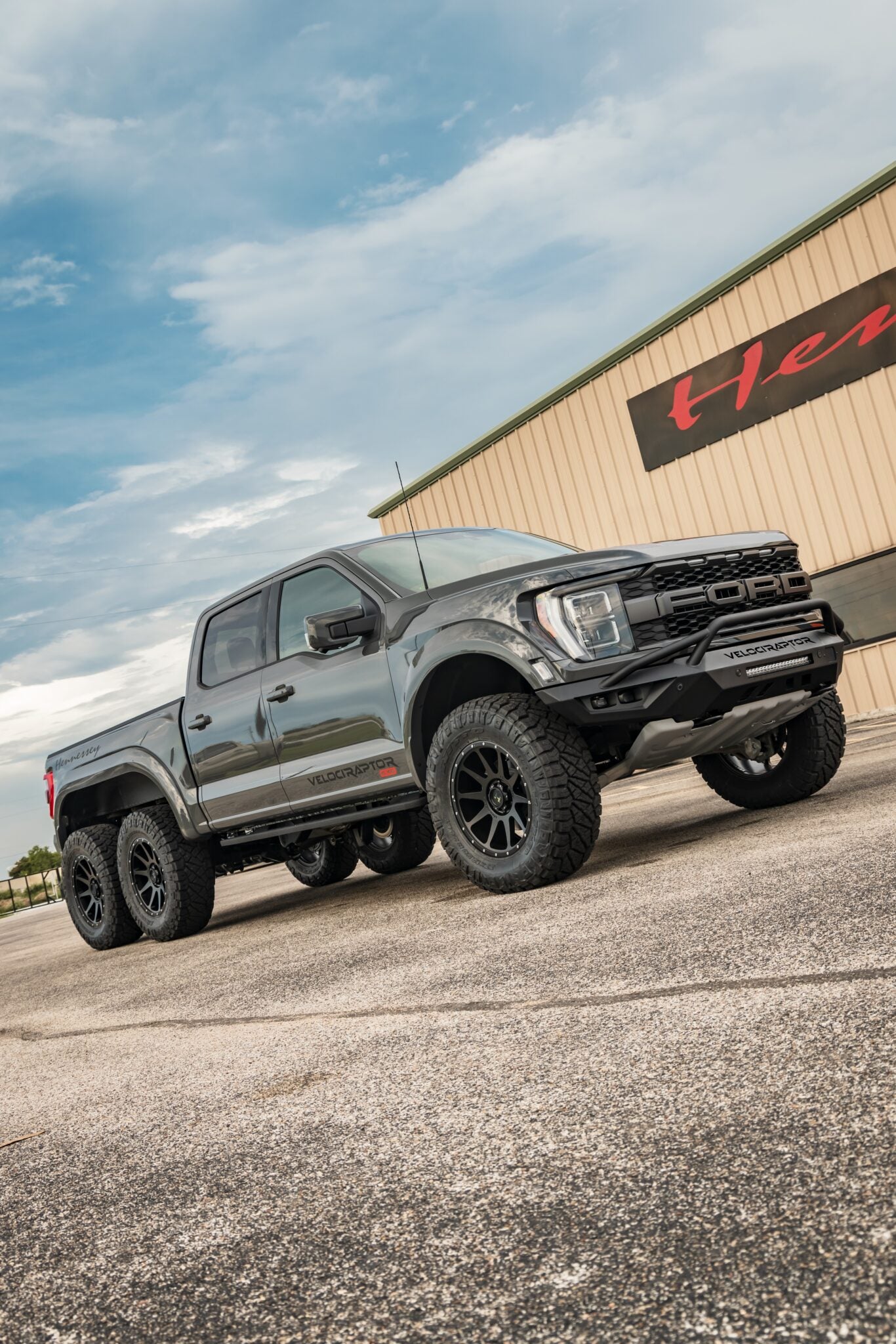 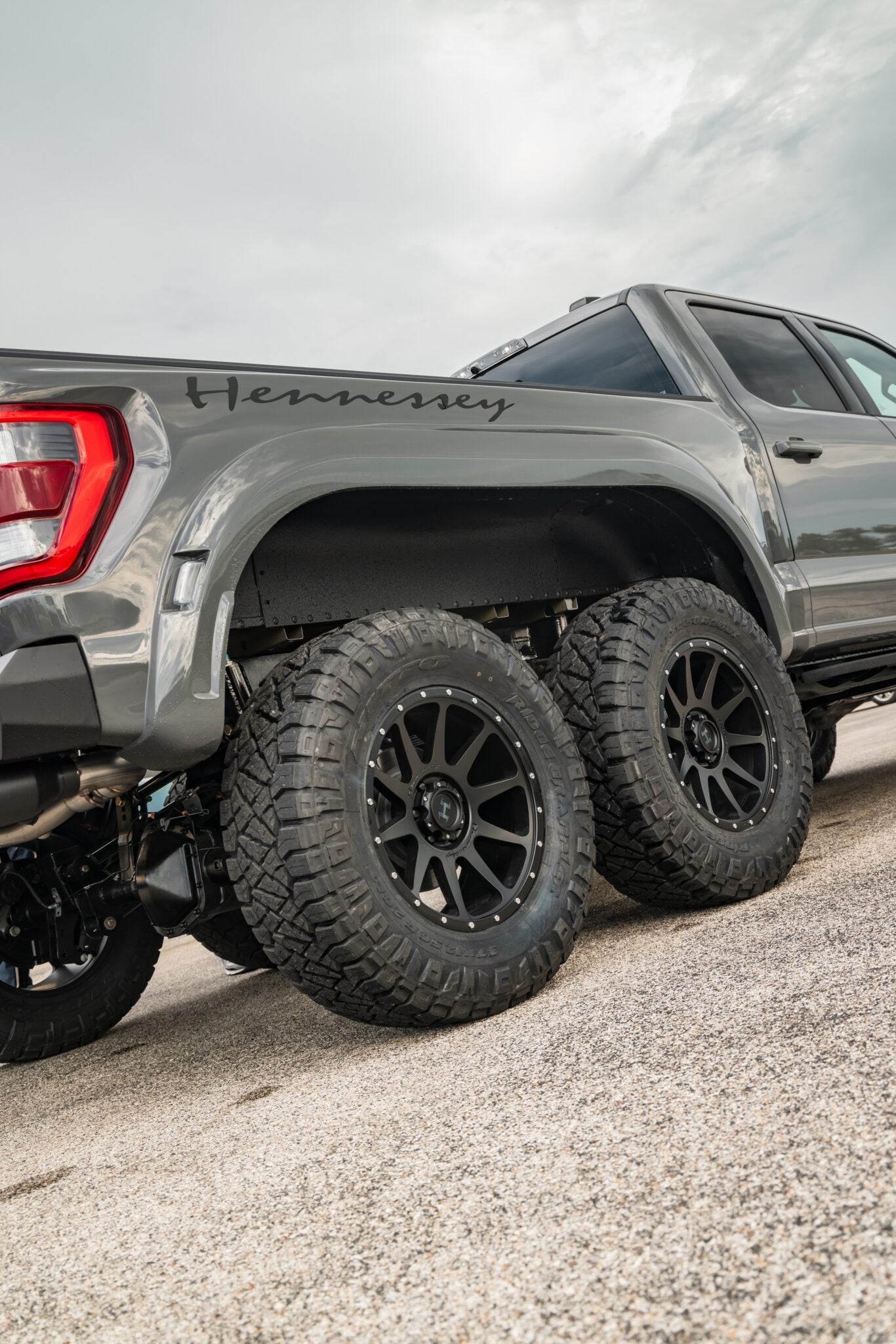 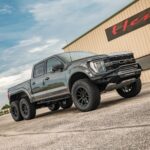 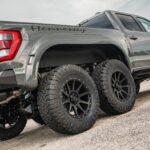 The Hennessey Velociraptor 6×6 is a Crazy, Wild Monster Truck!

We dig the third-gen Ford F-150 Raptor and its high-strung twin-turbocharged 3.5-liter EcoBoost V6, but Texas-based tuner and auto builder Hennessey Performance Engineering (HPE) has made us want it more. The Hennessey Velociraptor 6×6 is the latest variant of HPE’s quirky yet badass monster truck. It still has six wheels, a tuned EcoBoost V6, and an imposing go-over-anywhere facade. However, Hennessey promises more performance updates to make it the most capable Velociraptor 6×6 in its lineage.

“Everything is bigger and faster in Texas, and our Velociraptor 6×6 takes this concept to the extreme,” said John Hennessey, HPE Founder and CEO. “Building on the capability, power, and presence of our Velociraptor truck, our latest six-wheeled offering will delight customers across the U.S. and worldwide.”

Hennessey Velociraptor 6×6: Bring On The Power!

Ram has unquestionably upped the ante in high-performance trucks with its supercharged TRX. Ford responded with the Raptor R and its 700-horsepower supercharged V8, and so the battle in the truck world rages on (including the battle between EV trucks). While we all hold our breath until Hennessey gets its hands on the Raptor R (Hennessey already has its six-wheeled version of the Ram TRX called the Mammoth 6×6), take comfort in the fact the third-gen Velociraptor 6×6 has enough grunt to match its testosterone-fueled silhouette.

Under the hood is the same twin-turbo V6 engine as a standard Raptor. What isn’t exactly standard on the factory Raptor is the enhanced induction system, a higher-capacity intercooler (with a blow-off valve), and a reconfigured engine management system. The power-hungry boffins at HPE managed to squeeze out 558 horsepower and 672 lb-ft. of torque, a significant hike over a stock Raptor’s 450 horsepower and 510 lb-ft. of torque.

Fitting two more wheels on a stock Ford F-150 Raptor takes more than just a hack-and-slash job. HPE has extended the chassis of the new Velociraptor 6×6 to make it “significantly longer” than a garden variety Raptor. The extra length not only frees up more space to install dual locking rear axles, but HPE managed to fit a longer eight-foot (2.4 meters) bed with 45 percent more cargo and storage volume than a ho-hum, four-wheel Raptor.

The Hennessey Velociraptor 6×6 has a base price of $399,950. You can place your order through authorized Ford dealers or directly through Hennessey. HPE commenced the first customer deliveries in early September 2022, so don’t be surprised if you see one prowling around the neighborhood. Hennessey also backs everything up with a three-year/36,000-mile warranty.