Must suck to be the Nissan GT-R. Yeah, it’s a fantastic car and a true track superstar, but being the best also comes with the burden of being the benchmark – the car that gets picked on and constantly compared to. The worst is when you – a supercar – are compared to the epitome of big-honkin’ SUVs – the Cadillac Escalade.

Of course, this is no typical blinged-out Escalade, it’s been given the Hennessey treatment with their new “HPE1000” upgrade package. That means it boasts, among many other engine upgrades, two turbochargers allowing the engine to produce just over 1000 horsepower from its 6.2-liter V8. The first thing that makes me wonder is how they’re able to get more power than the Bugatti Veyron with half the number of cylinders and turbochargers.

It also makes me wonder why you’d want over 1000 horsepower out of an already overpriced family-hauler. Aside from the fact, of course, that you could beat a Nissan GT-R in a drag race. Check out the video below for that little spectacle: 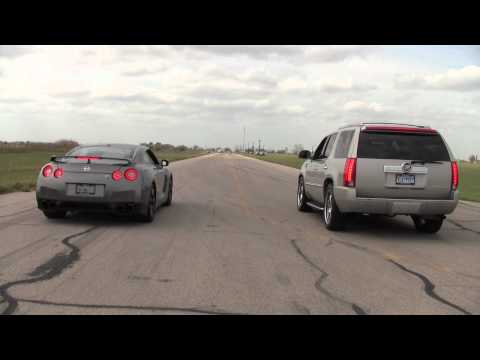 So that’s impressive, but there are a couple caveats here. First, the Caddy only beat the GT-R by a tenth of a second, and that includes the couple tenths head start it got off the line. Second, they aren’t using the new and improved 2012 GT-R, which happens to be able to hit 60 mph from a stop in only 2.9 seconds.

But still, a ridiculously heavy Cadillac Escalade beating a supercar at anything aside from amount of cargo space and size of its “dubz” is an impressive feat, so we give Hennessey props for that.

The HPE1000 kit is available for any 2007 to 2011 GM SUV or Truck using the 6.2-liter V8, so if you happen to own a Tahoe, Suburban, Silverado, Yukon, Sierra, Escalade or Hummer H2, you could (in theory) beat an (older) Nissan GT-R in a straight-line drag race. Check out some more pictures below, including a dyno chart: