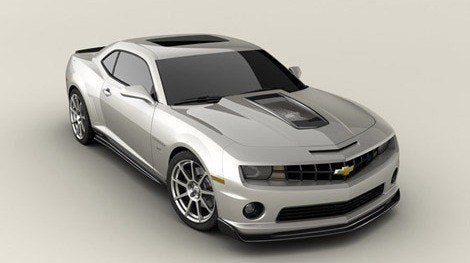 Looks like Reeves Callaway is still around, just ask Rick Hendrick. Yes, that would be the same Callaway that made factory authorized twin turbo Vettes back in the late 80s. And then started making his own Vette based sports cars for years after that. And yes, that’s the same Hendrick Motorsports that is to NASCAR what the Yankees are to baseball. So the two teamed up to make a fairly impressive 25th Anniversary 2010 Camaro SS that they’ll show at SEMA and sell a limited run of later on.

Camaros look to be the it car of this year’s SEMA show. There’s custom Camaros from Hurst, Lingenfelter, and Yenko, to name just three, and every time I check my in box, there’s some custom shop I’ve never heard of that is bringing their own version of the evergreen Camaro to SEMA.

In the case of the Camaro we’ve got here, it’s built by the deservedly respected Callaway for Hendrick Motorsports to celebrate Hendrick’s 25th anniversary in business. Hendrick Motorsports commissioned a limited, yet appropriate production run of just 25 of the cars, with each car commanding an enormous $76,181 price tag. Which is used Ferrari 360 territory.

Or, to try and keep things Camaro-centric, that’s the price of TWO fully loaded Camaro SS’s.

What do you get for 76 large? Carbon fiber, lots and lots of carbon fiber. The front splitter, rear diffuser, rear spoiler, rocker panels, and hood inserts are all made from the stuff. Which makes sense, because Callaway knows “black aluminum” about as well as anybody out there. I read an interview with him years ago in Race Car Engineering (great magazine by the way), where he went on for pages about his company’s lay-up and autoclaving techniques.

Also of note on the Hendrick Motorsports 25th Anniversary 2010 Camaro SS is a see-through ZR1-style hood that allows one a very nice view of the Eaton TVS supercharger bolted atop the V8 sitting in the engine bay. Besides the blower, the Hendrick Camaro other go fast goodies include an upgraded exhaust system, short-throw shifter, and Eibach suspension components.

The cherry on top? The cars can be purchased through Jimmie Johnson Chevrolet in San Diego, CA or one the three Hendrick Chevrolet dealerships. Jimmie Johnson … I swear, is there anything that the guy doesn’t own? And by the way, NASCAR should just go ahead and give him his 4th cup trophy and get it over with.

Back to Normal? Top 3 Trends in The Collector Car Hobby Right Now (Summer 2021)