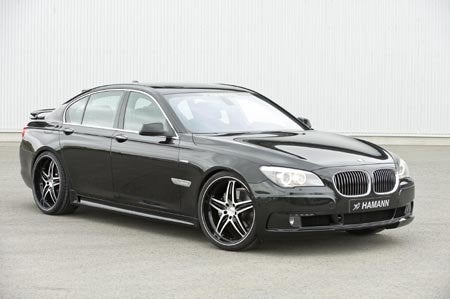 HAMANN, a German tuner long associated with BMW and all things efficient, Teutonic and powerful (although they never say why their name is in all caps like that), has just released the details on their latest working over of BMW’s 7 series flagship. HAMANN calls it ” Individualisation on the highest level”, but if you want it shortened to just three words it would be “Power. Power. Power.”

OK, for all you pendants out there that are getting ready to screed in about “Individualisation on the highest level”, yeah, I know it’s not Individualisation, it’s Individualization. That’s the way HAMANN spells it, and I was quoting direct, so go buy a flight to Laupheim Germany and bug them, not me.

The short list includes such goodies as stainless steel exhaust systems with a “sporty and earthy sound”, aerodynamic bodywork that reduces lift, and light alloy rims from 19 to 22 inches. On the inside there’s lots of leather and floor-mats in matching colors as well as non-slip aluminum pedals.

There are LED daytime running lights which are integrated in the new front skirt, which the company says, “render a sporty-dynamic look and increase the passive safety.” And by ” passive safety” I figure they mean the aero work keeps this beast o the ground at Autobahn speeds (sure, that counts as safety to me). There’s also a roof spoiler and the rear spoiler that also cut lift and gives ” the upper class limousine a new, attractive overall appearance. ” Yeah, that’s what they think, but to me it looks like dad’s car was taken over by the boy-racers and given the Vin Diesel treatment.

There’s also side skirts with an available rear shield insert for the side skirt of the model 730d and 740i allows fitting the four-pipe muffler with four round stainless steel end pipes clocking in at 90 millimeters in diameter that produce that “powerful, earthy sound” (which is just an hilarious way to mention it … what are they talking about, sounds like a review of a 70s jazz fusion concert).

HAMANN goes over the chassis. There’s four progressively coiled springs which lower the center of gravity by 40 millimeters at the front and rear axles, and HAMANN also says that it gives the 7 a “dynamic appearance. ” There’s also a lowering kit for the 750i and 750Li.

And they also do some cool stuff with the diesel version of the 7. Variable turbine geometrics are already in the works that will increase the oil burners power output by 45 HP up to 245 hp. 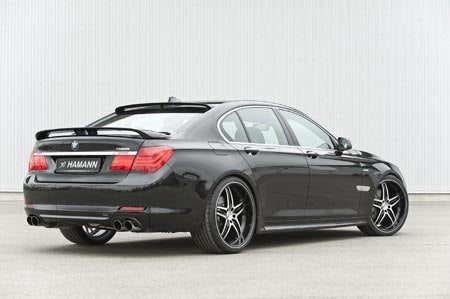 Individualisation on the highest level – this is the motto under which HAMANN presents its refining programme for the new BMW 7-series of the model range F01 and F02. Already since 1986, the Laupheim-based company develops and produces products for the individualisation of BMW automobiles. Thereby, the HAMANN technicians profit from hundreds of successful motor sports participations. The competence which was gained there is the basis for the development of new HAMANN products and renders the highest level for product quality and processing. The result: stainless steel exhaust systems with a sporty and earthy sound, aerodynamics components reducing the lifting forces and striking light alloy rims from 19 to 22 inches. Interiors perfectly fitted with leather and combined with floor-mats in matching colours as well as non-slip aluminium pedals extend the accessory range.

Already when establishing the design, HAMANN perfectly adjusts the individual components of the aerodynamic pack. The result is an exciting styling with an optimised air flow across the car silhouette. LED daytime running lights which are integrated in the new front skirt, render a sporty-dynamic look and increase the passive safety. Simultaneously, in combination with the roof spoiler and the rear spoiler, the lifting forces are reduced and give the upper class limousine a new, attractive overall appearance. The visual connection between the front and rear part are the HAMANN side skirts which are available for the model series F01. The optionally available rear shield insert for the side skirt of the model 730d and 740i allows fitting the four-pipe sport end muffler. Four round stainless steel end pipes with a diameter of 90 millimetres perfectly enhance the rear part of the 7-series BMW and produce a powerful, earthy sound.

A performance enhancement for the Diesel engine with variable turbine geometrics is already under construction. By this first tuning stage the serial measure of the 730d (180 kW / 245 hp) increases by approximately 33 kW/45 hp.

A technical highlight of the offered tuning programme is the one-piece HAMANN-aluminium wheel called DESIGN HM EVO 22 inches. A hallmark of the modern styling is the glossy black paint with the diamond-grinded rim star and the discreet deep rim well. Five elongated and over-vaulted triple spokes document visual and technical finesse. Struts inside the spokes render additional stability. Modern production processes and the use of special aluminium alloys guarantee highest bearing loads at a low weight. Here, HAMANN recommends the dimensions 9.0Jx22 inches with 265/30ZR22 tyres at the front axle and 10.5Jx22 inches with 295/25ZR22 tyres at the rear axle.

The four progressively coiled chassis springs which lower the centre of gravity with the models 730d, 740i by 40 millimetres at the front- and rear axles, render a dynamic appearance. For the models 750i and 750Li, there is a lowering kit consisting of two chassis springs and an evening kit.

In addition to the existing, serial interior equipment, HAMANN accessories made first-class aluminium, pedals and foot-rests render motor sports air and perfectly match the embroidered HAMANN floor mat set. If desired, even a complete leather equipment can be produced with expert precision.