Ford Unveils the Next Snake: the Shelby GT350 Mustang 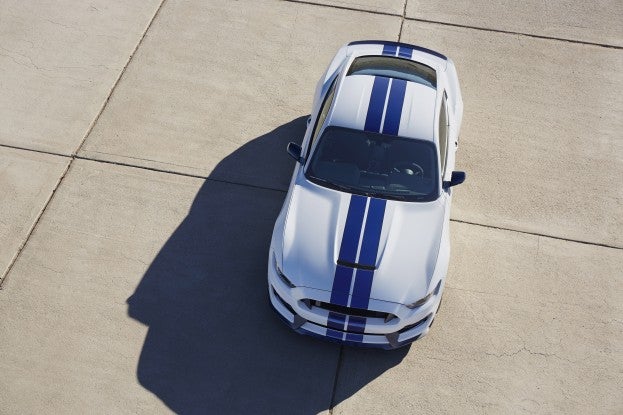 It was at the 1964 New York World’s Fair, when Ford pulled the cover off of the Mustang that a legend was born. The problem was it was seen as a secretary’s car and not taken seriously as a performance car. That’s when one of the great partnerships was formed when Carroll Shelby, a chicken farmer from Texas, who happened to know a bit about making a car fast worked his magic on the Mustang. What resulted is the 1965 Shelby GT350.

The 1965 and 1966 Shelby GT350s would go down in history as two of the best Mustangs. Now 50 years into the life of the Mustang, Ford is reintroducing the Shelby GT350, which promises to be a best production Mustang to date. A tall order as the Boss 302 proved that the Mustang was more than just a muscle car, but a true sports car that had to be taken seriously by all. Designed to be able to handle any race track or road, the new GT350 aims to take what the Boss 302 did for Mustang’s reputation and take it to the next level. So, what’s so special about this Mustang and can it live up to its namesake or did Ford screw the pooch calling it the GT350.

“When we started working on this car, we wanted to build the best possible Mustang for the places we most love to drive – challenging back roads with a variety of corners and elevation changes – and the track on weekends,” Ford group vice president, Global Production Development Raj Nair said in a press release. “Every change we made to this car was driven by the functional requirements of a powerful, responsive power plant – nimble, precise handling and massive stopping power.” 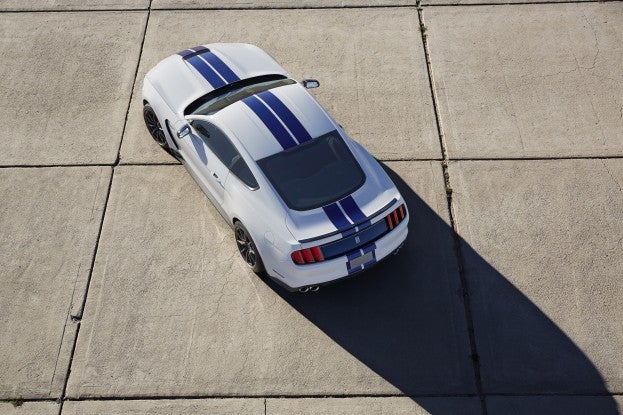 As I said before a lot of big talk but they have some big shoes to fill and some stiff competition.
Getting right into it is the 5.2 liter V-8, which on the surface isn’t that impressive. But early in the development of the car it was decided that a high-revving, naturally aspirated V-8 would best suit this car. So what did Ford do, they designed a brand new flat-plane crank 5.2 liter V-8, churning out over 500 horsepower and over 400 pound-feet, making it the most powerful naturally aspirated production engine ever produced by Ford. 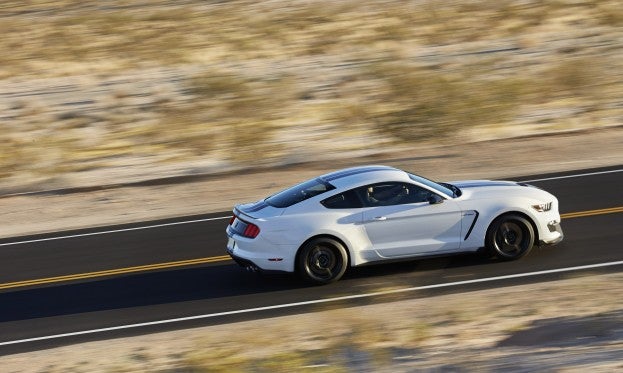 “The final product is essentially an all-new power plant unique to GT350 – and one that takes true advantage of the new chassis dynamics of the Mustang platform,” chief engineer, Ford Global Performance Vehicles Jamal Hameedi said in a press release.

A flat-plane crankshaft isn’t a new technology as it is regularly found in race cars and European exotics but it is new to the Mustang. What sets it apart from a traditional V-8 is, where the connecting rods are attached to the crankshaft at 90 degree intervals, a flat-plane crank positions the crank pins evenly spaced at 180-degree intervals. This architecture allows for a firing order to alternate cylinder banks, reducing the overlap of exhaust pressure pluses. Combined with cylinder-head and valvetrain advancements, the cylinders breathe better and the performance of the engine is even greater.

“Make no mistake, this is an American interpretation of a flat-plane crankshaft V-8, and the 5.2 liter produces a distinctive, throaty howl from its four exhaust tips,” Hameedi said. 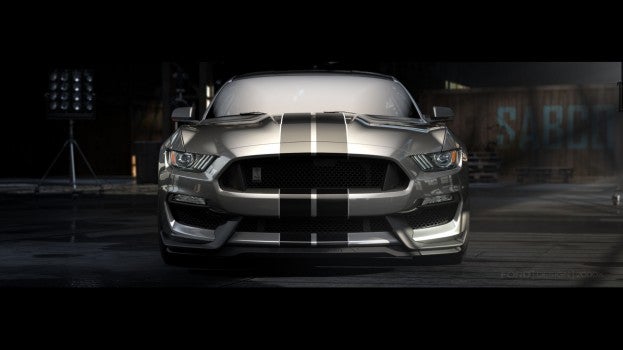 This American flat-plane crank V-8 will be mated to a six speed manual transmission. Ensuring grip and straight-line traction is a Ford-tuned Torsen limited-slip differential.

Entering into the sixth generation of the Mustang, Ford is saying this is the strongest Mustang platform ever with increased torsional stiffness of 28 percent over the previous generation. That additional stiffness translates into suspension geometry that remains the same, even under extreme driving conditions. Additionally the stiffness in the front has been improved with carbon fiber composite front grille opening and an optional lightweight tower-to-tower brace. Spring rates and bushing have been recalibrated all around and the front track has been increased and the GT 350 sports a lower ride height then the Mustang GT.

Michelin Pilot Super Sport tires with GT 350-specific sidewall construction tread face and compound will be wrapped around 19-inch aluminum-alloy wheels – 10.5 inches wide at the front and 11 in the rear. In order to provide ultimate responsiveness to changing conditions Ford is for the first time using MagneRide dampers. Filled with hydraulic fluid impregnated with iron particles, the dampers respond to an electrical current allowing for near instant adjustment of the suspension performance. Combined with wheel position sensors that are monitoring motion thousands of times per second and other vehicle data, changes can be made at any corner of the car independent of each other every 10 milliseconds. This optimizes the performance of the car and gives the driver a higher level of confidence.

The exterior has also been given quite a bit of attention with Ford saying the changes are meant to improve the performance.

“Everything we changed on the GT350 is purely functional-driven design, with the goal of improving the overall performance of the car,” Ford Design Director for the Americas Chris Svensson said in a press release. “We optimized the aero shape of the car, and then fine-tuned what was left to increase downforce and cooling airflow.” 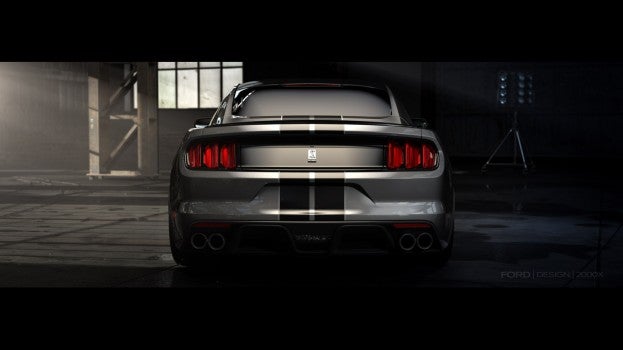 This evident in the fact that Ford is saying all of the bodywork in front of the windshield as being bespoke to this car. A new aluminum hood has been lowered and sloped, in comparison to the base Mustang and tightly wrapped around the engine for the smallest possible aerodynamic impact. Aero elements have been placed at the front and rear to work in concert with each other on the track.

Redesigned fascia provides the aggressive lower front splitter maximum pressure and a ducted belly pan means significant downforce. Louvers in the hood serve to extract heat all the while reducing lift at high speeds. The rear has also received a great deal of attention with a functional diffuser that increases downforce and cools the optional differential cooler. A subtle spoiler on the decklid increases downforce while not adding excessive drag. The stance of the vehicle is aided by reshaped front fenders to accommodate a wider front track and wider wheel arches. Vents placed in the front fenders work with vents in the inner fender to draw out turbulent air in the wheel wells. The final bit of aerodynamic changes is the grille which is designed to direct air to the radiator, intake, cooling duct for the front brakes and oil and transmission cooler included in the optional track pack.

In years past the criticism regularly thrown at the Mustang is that the interior isn’t very good. To address this Ford is saying the GT350 will have an interior that like the rest of the car is optimized for driving. The first nod to this is the Recaro seat, designed for GT350 with a unique cloth. The steering wheel will sport a flat bottom, for what Ford says are improved ergonomics. Additionally there are infotainment upgrades available, leather and power seats, MyFord Touch and other options. But in a car like this it would be an absolute travesty in a car meant to be able to perform as well as on the street as the track.

This car seems to be directly aimed at the Camaro Z28 and for that reason whether you’re a fan of the Camaro or the GT350, we all win. With both of these cars on the market there is actual competition and that will only improve the breed. I look very much forward to seeing these on the street and the track in the hands of consumers, but I’m more excited about the prospect of the racing version. Another thing I would like to see Ford do is make this engine available as a crate engine available for purchase as I can only imagine the incredible things that a builder could do with this engine. I’m thinking a 1965 Mustang fastback with this engine. It would be a magnificent thing. Make it happen. 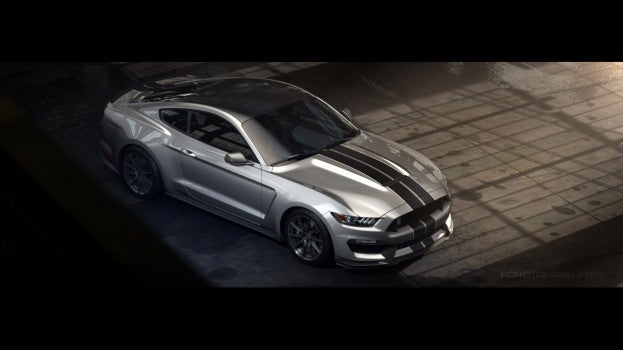 It looks to be a future classic before even making it to production and I personally am thankful that the car they showed acknowledges the original when it was showed in white and blue . So, I have to tip the proverbial hat to Ford for the GT350.