100 years ago, designing a car was all paper and pencils, slide rules and French-curves, body bucks and modeling clay. About 40 or 50 years ago, vehicle designing drifted more toward computer modeling and other automated and detached methods. For all that CAD/CAM and 3-D shaping brought: ease of variability, iterative sizing, better proportioning, and things like that, it did, by and large, take car designers out of the real-world. It might have worked on paper or on a computer screen, but get that prototype car fleshed out in sheet steel sitting under natural light, and many unseen flaws would become all too apparent.

Ford designers have taken a step away from the CAD screens and, curiously enough, have also backed off the tried and true, old school clay-sculpting steels and rakes, and swapped in some mixed reality headsets and trick visualization software. This allows them to change design elements like side mirrors, grilles, interiors, and more at the click of a button.

Ford chooses to call it “mixed reality,” but what we’re really talking about here is generically referred to as “Augmented Reality.” Unlike the better known and over-hyped Virtual Reality (which has been the next big thing/revolution that will change the very fabric of society itself sometime next year since 1989), AR puts digital things in the real-world that you’re already seeing through special glasses or other head mounted displays.

A few years back I was working for a company that, among other fun things, did museum designs. We were working on a museum that was going to have an interactive Coast Guard rescue helicopter exhibit. One of the ideas was having a static Coast Guard rescue helicopter sitting inside, and then handing out Augmented Reality headsets to people as they got in the chopper. You’d put the headset on, you’d see the chopper and the museum and other guests around you, but you’d also see weather and the environment beyond the rescue helicopter. So if you were sitting in the pilot’s seat, outside the windows you’d see coastal Alaska and wind-swept seas, and the fishing boat you had to rescue. Even better, if you were sitting at the open helicopter door, working the virtual winch, you’d look out and down, and in addition to seeing the carpet on the museum floor, 100 or so feet below you’d “see” a fisherman waiting to be plucked out of the water.

I tested this out, sitting in an office chair one day, and the effect was downright creepy. It wasn’t completely as immersive as VR, but AR worked surprisingly well enough to make you feel you were in one of Igor Sikorsky’s finest, and there was a person on the verge of drowning. Ironically, the weakest link in building this was finding a disused Cost Guard helicopter that was cheap enough. Those things are amazingly expensive.

Another interesting coincidence, as far as Ford is concerned, is that one of the better purveyors of Augment Reality is, of all people, Microsoft. The Redmond, Washington-based concern has this hardware/software rig they call the HoloLens that, with a little bit of tweaking, can add Augmented Reality to seemingly any given situation. Ford designers have been working with Microsoft HoloLens technology for a year now at FoMoCo’s Dearborn studios.

HoloLens allows them to see possible design elements in a virtual sense as if they were part of the actual physical vehicle sitting before them. HoloLens allows them to investigate different shapes, sizes, and textures of vehicle characteristics in minutes and hours, rather than weeks and months using clay models. What would that lower body cladding look like in smooth finish instead of textured? Click, click, boom. Now you can see it. What if we change all of the trim pieces from black to a satin chrome? Click, click, boom. Now you can see it. And not just see it, but you can walk around the actual, physical car in real-space, in real-time.

The system works and tracks with you through the wire-free headsets. There’s a Windows 10 computer embedded in the headset and the whole shee-bang is untethered, wearable, and mobile; no tethering, no cables, no problem. Microsoft’s HoloLens allows designers to see projected holograms against photo-quality backdrops; on the street in the summer, at night in the rain, those sorts of scenarios. So now, if something doesn’t work, looks strangely proportioned, is lacking the needed surface tension, Ford’s designers can quickly reevaluate the design, make changes, and determine styling options much earlier in development. The HoloLens technology enables designers and engineers to better collaborate and understand the customer experience as well.

The headsets can even be synced so multiple team members can view a design simultaneously for easy collaboration. They can also record audio notes for team members working in other time zones or off-site to review.

“It’s amazing we can combine the old and the new – clay models and holograms – in a way that both saves time and allows designers to experiment and iterate quickly to dream up even more stylish, clever vehicles,” said Jim Holland, Ford Vice President, Vehicle Component and Systems Engineering. “Microsoft HoloLens is a powerful tool for designers as we continue to reimagine vehicles and mobility experiences in fast-changing times.” 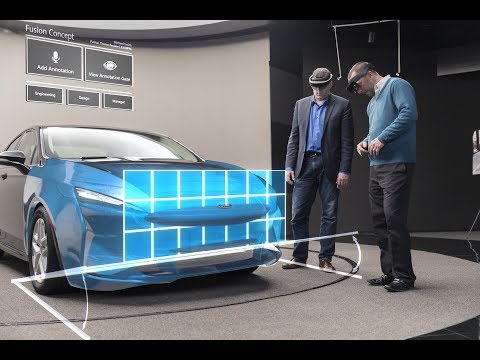