With the holidays fast approaching, additional travel for many families is expected and for some, additional apprehension. Holiday weekends are a catalyst for this, particularly with impaired driving.

According to the National Highway Traffic Safety Administration (NHTSA), approximately 18 percent of all motor vehicle driver deaths involve drugs other than alcohol, including marijuana and cocaine. An separate NHTSA roadside survey found that 22 percent of drivers tested positive for illegal, prescription, or over-the-counter drugs.

These figures reflect a rise in drugged driving.

The new suit is expected to enhance the curriculum, being based on a similar design already in use.

“We have already seen first-hand the eye-opening effect that our Drunk Driving Suit has had on those who wear it, and are confident that our new Drugged Driving Suit will have a similar impact,” said James Graham, Global Program Manager for Ford Driving Skills for Life.

Ford developed the Drugged Driving Suit in conjunction with scientists from the Meyer-Hentschel Institute in Germany. Together, they simulated the effects such drugs like cannabis, cocaine, heroin, and ecstasy have on a driver. The adverse effects included slower reaction time, distorted vision, hand tremors, and poor coordination overall.

This spells disaster behind the wheel.

“Driving after taking illegal drugs can have potentially fatal consequences for the driver, their passengers, and other road users,” Graham said.

“Drug users sometimes see flashing lights in their peripheral field, an effect recreated by our goggles, while imaginary sounds are generated by the headphones, and the goggles distort perception with colorful visual sensations – a side effect of LSD use,” he said.

Ford Driving Skills for Life has provided guidance to over 500,000 motorists worldwide since its inception. The Ford Motor Company Fund, Governors Highway Safety Association, and a panel of safety experts brought the program to fruition in 2003. The program works with both parents and teenagers, providing them skills and resources beyond standard driver education classes. By the end of 2015, Ford Driving Skills for Life will be available in 30 countries with a driving clinic conducted in all 50 United States and Puerto Rico.

According to the 2013 National Survey on Drug Use and Health, approximately 9.9 million people 12 and older reported driving under the influence of illicit drugs. Although sometimes considered harmless, marijuana is equally dangerous. A meta-analysis of multiple studies from the National Institute of Health reveals the risk of being in an auto accident roughly doubles after marijuana use.

Impaired driving is not worth the risk. You could injure yourself, somebody else, or far worse. Free professional help is available through the Substance Abuse and Mental Health Services Administration. Their national helpline can be found here. 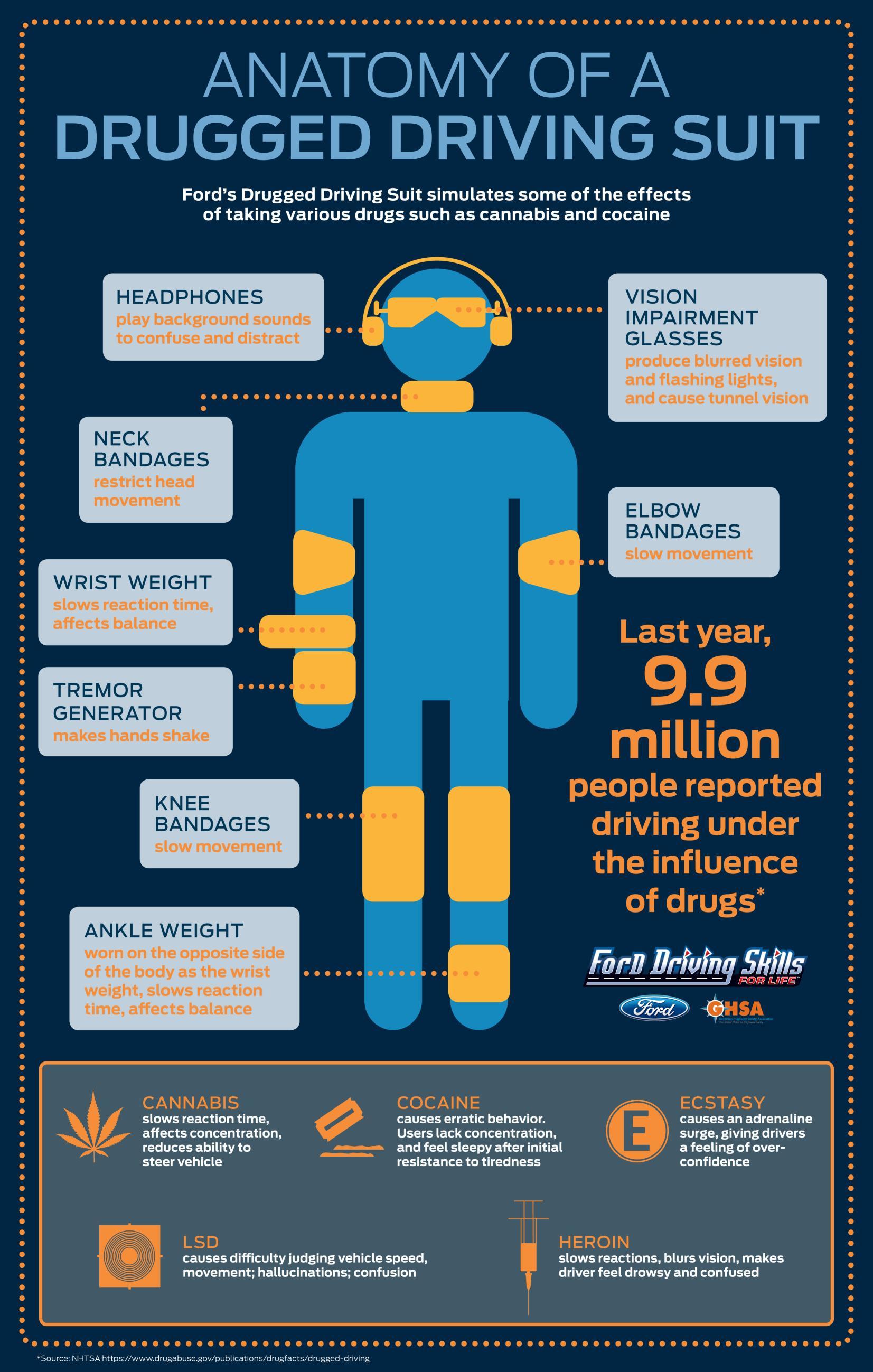