Ford F-150: The Mustang of the Truck World 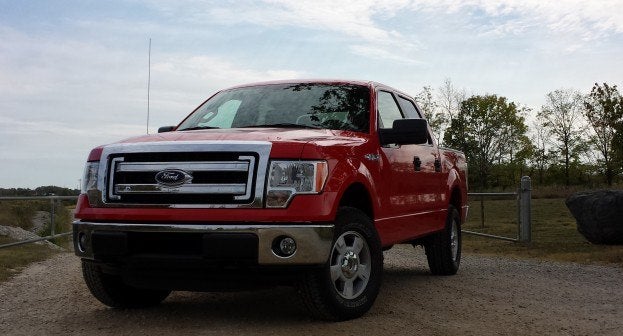 It wasn’t too long ago when trucks meant work. While the SUV frenzy over the last 20 years has evolved to include CUVs, America’s love affair with trucks has remained strong. Gas prices be damned!

Only one truck has hauled, trekked, and towed its way to being the most popular vehicle in America for more than three decades: Ford’s F-Series.

With trucks getting more expensive, many are spending their lives pampered. Case in point: the 2013 Ford F-150 XLT SuperCrew 4×4 I drove. Its MSRP of $38,735 is just $535 more than the starting price of a Mercedes-Benz C-Class coupe.

Of course, there’s almost a zero percent chance anyone would cross-shop these vehicles. It raises the question, though: if you use a truck for its intended purpose only a few times a year, do you really need one? Though I have no business owning a truck, it’s likely I’d be evenly torn between a new Mustang and F-150 if I had the money.

Table of Contents show
1) Bigger is fun
2) But bigger isn’t always better
3) Endless possibilities
4) Would I choose it over a car?

Never mind that it offers more interior space than a Southeast Asian bungalow, nothing beats driving a four-wheel drive. Okay, maybe it’s not that big, but it sure feels like it from behind the wheel. The F-150 XLT is to the Mustang GT as the SVT Raptor is to the Mustang Shelby GT500. The XLT and GT aren’t as flashy or quick as their brash counterparts, but they stay under the radar while performing the same job. Like the Mustang, the F-150 comes with a standard V6, but similarities end there. A brutish 360 horsepower 5.0-liter V8 is the “smallest” engine the SuperCrew model offers. It definitely gives dull morning commutes a kick in the ass with a nearly unobstructed view of the road that a Mustang can’t match. If you wouldn’t love the idea of unleashing 360 horses and smoking smartasses at red lights, you have no soul.

I encountered an unexpected problem a Mustang wouldn’t have: the F-150 was too big for my garage. After a few heart-stopping attempts, I raised the white flag and left it outside.

While size can be an issue for some, thirst is F-150’s Achilles’ heel. Its V8 is rated at 14 mpg city and 19 mpg highway. I averaged 14.4 mpg with mixed driving. Even with economy ratings in line with competitors, those numbers might cause someone to think before signing on the dotted line – or at least consider the EcoBoost V6. This truck would give a hypermiler a coronary, but the more aerodynamic Mustang V8 wouldn’t fare much better in town with 15 mpg city and 26 mpg highway.

An American pickup has an intangible, almost patriotic, appeal. The Ford F-150 isn’t as ostentatious as a luxury SUV – even though the Limited starts at $53,300 – nor is it as neutered as a crossover in suburbia. It’s a healthy blend of both. As I spent more time behind the wheel, the more compelled I was to do things impossible in a car, like buying a tree at Home Depot because I could take it home.

Hell, if it’d snowed, I would have wanted to plow something. After searching for ways to reasonably take advantage of its off-roading ability, the closest I got to going sans pavement was parking in the grass. I’ll say, though, the ride on that 50-foot stretch was quite smooth.

Ford’s F-150 is almost as legendary as its Mustang. With Toyota and GM upping the ante for 2014, the redesign for 2015 won’t be a moment too soon. The F-150 is the second oldest design in the segment, with only Nissan’s Titan being older. That said, it’s difficult to come of terms with the price tag and everything else it could buy. Yes, much of what makes it great is under the metal, but what’s the point if you don’t need it?

If I owned a ranch in Montana, I’d take an F-150 in a heartbeat. With chances of me either owning a ranch or moving to Montana as likely as Congressional politicians from both sides of the isle holding hands and singing “Kumbayah,” I’d take a Mustang instead.

At least it’d fit in my garage.