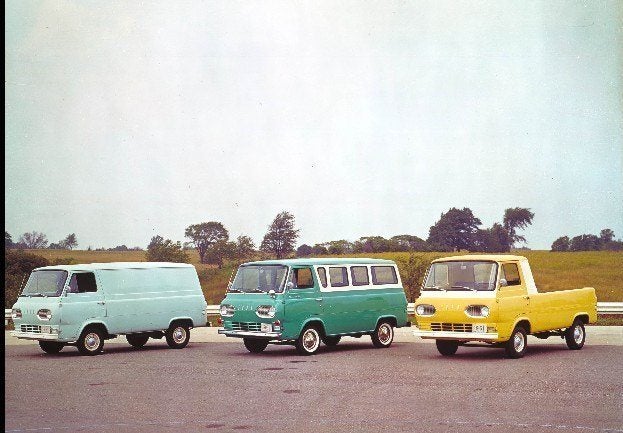 It’s hard to believe back before 1960 that North Americans were still unfamiliar with the concept of a consumer-sold, enclosed truck-based vehicle which could carry large cargo loads or passengers. With exception to the limitedly available VW Bus (keeping in mind Volkswagen of America was only 5 year old and still building a national dealership network), Ford rolled-out their first large-sized delivery van in 1960 in advance of the 1961 model year. In production since, the 2011 Ford E-Series reigns through for a golden anniversary.

Entered as competition against the highly-touted Chevrolet Corvair van, history has played into the hands of the Blue Oval who elected with a front-engined configuration over the Convair’s less conventional rear engine. Ford’s large van originally wore two nameplates with cargo van versions recognized as the Econoline and the passenger versions were called the Falcon van. There was also a pickup version in the production line showing the fusion of vehicle body styles was still vibrant in that era. After 1967, the Econoline name reigned supreme on the large van becoming a renowned name for major transport companies and businesses. Successfully, the Ford Econoline became the predominant workhorse for hospitals starting in the late 1960s eventually weeding out the than-favoured modified Cadillacs from the profession of Ambulance.

Acting like a changeling, the Ford Econoline van became a staple in converted forms. One of those variations becoming popular was small recreational vehicles that provided scores of weekend warriors with an affordable alternative to the Winnebago. School buses also made use of a rolling chassis to create the vehicles that led many of us to classes through rainy or worse yet warm, sunny days.

Today, known as the Ford E-Series (Econoline was dropped into the 2001 model year) the van starting at 216.7 inches long continues to remain relevant even while smaller commercial van market is starting to heat up in North America. Equipped with available technology such as Ford’s SYNC system and the Ford Work Solutions package, the E-Series powertrain can also be purchased to run on Compressed Natural Gas as opposed to regular gasoline. Moving on power provided through a either two V-8s and a Triton V-10 in 2011, the E-Series van’s muscle has come a long way from the in-line 6 cylinder belonging to the 1960s first-generation vans. Cargo capacity and passenger room is also quite a bit more robust on the current E-Series. 2011 E-Series vans in the longer 236.7 inch E-350 SD layout can seat up to 15 passengers.

Instead of accepting some glitzy honour for its 50th birthday, Ford’s large van is simply going to work adding other day to serving the American commercial and individual transportation interests.