Living in a wonderful era where even the most basic piece of technology can be tailored to capture personality, part of this expression has included a growing series of celebrity and character voices available for in-car GPS devices from TomTom and Garmin. For the Garmin devices, the superiority of the electronic navigation marketplace was thrown to the path of the galactic empire.

Introduced in July, the evil lord of the Star Wars universe Darth Vader voice app has been seducing motorists to the dark side of the Force. Led by the Imperial march theme and the deep tone of emperor’s top servant, Locutio Voice Technologies Limited as well as the principals of Lucasfilm Limited delivered avid Star Wars fans with one-half of the conflict captured in the film series.

For those seeking the savior of a Jedi Knight against the Galactic Empire presented through Garmin devices, a new hope is brought to market with the Yoda premium voice app.

Having Darth Vader or Yoda as your co-pilot will ensure that users of Garmin devices can now share in the magic of Star Wars,”. From the same corporate partners involved with the Darth Vader voice app, the long-time Jedi protector

Yoda has been brought to compatible Garmin units as the ultimate balance to the Force after first being sold only on competitor TomTom devices. Downloadable for $12.99 on Garmin.com, the Yoda premium voice app presents the prospective of heroes relating to the Jedi Knights as well as the Rebel Alliance.

Guided by the Star Wars character’s unique speech pattern, the Garmin Yoda premium voice app leads with phrases like “After 200 yards turn right… then bear left…but not to the dark side” and “When 900 years old you reach, navigate as well you will not“.

When a motorist reaches their location, the Yoda premium voice app will reward the driver with the John Williams composed Star Wars theme and Yoda speaking in the foreground saying “You’re destination you have reached. Powerful you have become”.

Along with audio inspired by the Star Wars movie including light sabers Visual graphics on the Garmin GPS device is also modified with the Yoda premium voice app.

Representing the droids from the Star Wars franchise, Voiceskins offer a C-3P0 voice app that also combines the sounds of R2-D2. The C-3P0 premium voice app is currently available to just TomTom devices. There was also mentions of a Han Salo version of the celebrity voice app last year but the app has yet to be released.

For a sample of the Yoda voice app, the video below provides what could be the start of your Jedi training behind the wheel: 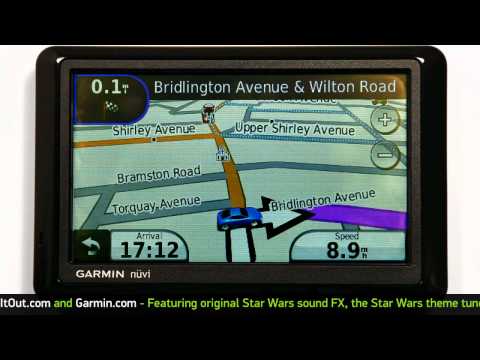