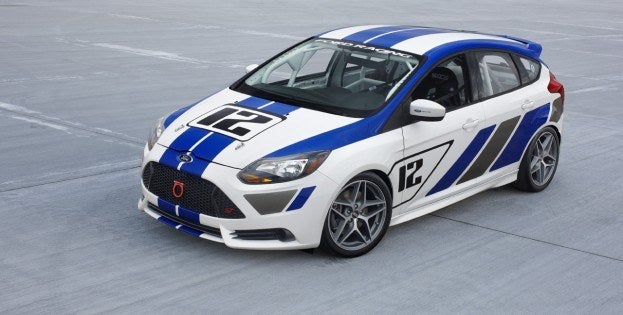 For most the prospect of “One Ford” would seem to limit creativity and the ability to produce localized performance models for different markets. For one, Ford’s globalization plans primarily include core models; there will still be select variants and model lines that are unique to different areas.

The Focus ST released at Frankfurt is Ford’s first truly global performance vehicle, to be sold in over 40 markets. The ST-R racing model that follows is starting off exclusively in North America and will be spread to European markets after.

Its goal is to offer affordable racing for enthusiasts. Economies of scale for parts are clearly there with all the volume. Ford Racing in North America designed the ST-R, in partnership with the Global Performance Vehicles group. It is homologated for racing in a variety of series that include the Grand-Am ST, World Challenge TC and Canadian Touring Car Series. Each Focus ST-R comes turn key and ready to go. The ST-R is powered by the same 2.0-liter EcoBoost as the ST, and it includes an FIA-specification roll cage, upgraded braking power and a “track-tuned” suspension.

Ford says the ST-R had a perfect basis to build from: “From the beginning, the Focus and new Focus ST were designed to be driver’s cars,” says Jost Capito, director of Global Performance Vehicles and Motorsport Business Development. “The road-going Focus features best-in-class brakes, handling and powertrains and the design and functionality of the various vehicle systems have helped us to develop a global technical specification for teams wanting to race the new Focus cost effectively. Ford Racing in North America has taken this effort and developed the new Focus ST-R and is a perfect example of how a great production car inspires a competitive race car for enthusiasts.”

We’ll have to see for ourselves when the standard ST arrives. For now though, we imagine the ST-R is set to make a significant splash in racing. No word on whether there will be any requirements for purchase; Ford says it will be available to order by “seasoned hardcore professional drivers, amateur racers and track day enthusiasts.” All the aforementioned buyers better be prepared with a good amount of cash though; the Focus ST-R will dent your wallet to the tune of $100,000.