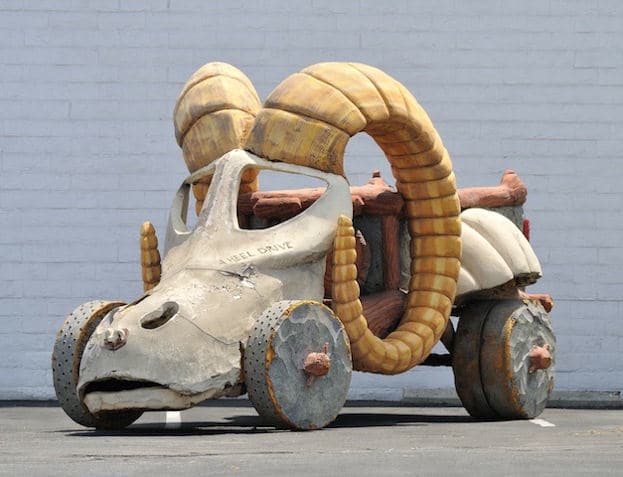 If you’re a person who can appreciate pre-owned items, you would like to know as much about the history of an item‘s past as possible. With celebrity auctions, buying an item depends heavily on the previous owner unrelated to the product itself. Existing as an opportunity to pay ridiculous amounts of money for former belongings related to famous people, Mecum Auctions is readying to stage their first celebrity item show in Santa Monica, California. A well-known name in car auctions, the Mecum has presented a line-up of celebrity-attached vehicles as part of this summer of 2013 event.

Officially titled Mecum Celebrity Items Auction: Celebrating the Legendary History of Hollywood, the collection of two and four-wheeled vehicles connects to many famous names. Well-documented celebrity motorhead Steve McQueen will be placed at the forefront at this auction. While the super-famous Bullitt Mustang or the Gulf-sponsored Porsche 917 will not be part of the auction, a Baja truck and motorcycle has the prominence of McQueen. Built by famed off-road vehicle designer Vic Hickey, the 1969 Chevrolet C10 Baja race truck was owned by Steve McQueen for several years in the 1970s. In addition to the McQueen pedigree, this special 1969 Chevrolet C10 truck also holds the history of being involved in the first Baja 1000 race. A classic 1931 Harley Davidson VL 74 motorcycle will also be part of the Mecum Celebrity Items Auction.

For fans of the man regarded as the “King of Rock and Roll,” Elvis Presley’s custom station wagon in the Santa Monica auction could be “Too Much” for some hardcore lovers to handle. One of Elvis’ greatest obsessions was his appreciation for Cadillacs. Demanding a station wagon but realizing that Cadillac did not make one at the time, The King would not be denied. Using a 1972 Cadillac Sedan Deville and pieces found on other full-sized General Motors station wagons of the time, a luxury family hauler was created. For other North Americans, the Cadillac wagon would not come to market until the 2010 model year when the CTS Sport Wagon debuted.

Other vehicles set for sale at the Mecum Celebrity Items Auction includes celebrity daily drivers and star cars. Frank Sinatra’s V12-powered 1989 Jaguar XJS, a former Ringo Starr-owned 1957 Chevrolet custom coupe built by famed Batmobile creator George Barris Custom, and the 1973 Chevrolet El Camino recognized from the TV show “My Name is Earl” is an expanded sampling of what the 2013 auction will feature. Also up for bids is a movie vehicle created for the 1994 feature film “The Flintstones. “ I am afraid I do not remember at what point this vehicle appeared in “The Flintstones” movie, but it has to be one of the ugliest from either the prehistoric or the modern age. Some of the other items included in this year’s Mecum Celebrity Items Auction would delight fans of the big screen, silver screen, and other forms of entertainment. A face mold of Arnold Schwarzenegger used in the 1990 sci-fi classic Total Recall and a pair of prescription sunglasses worn by John Lennon are some of the non-vehicle items set for the Santa Monica auction on July 26th and 27th.

The Mecum Celebrity Items Auction will be held at Barker Hangar (the same venue that recently held the launch of the 2014 Toyota Corolla).