The last time I uttered that sentence was when I first saw the blue 1999 Nissan Skyline R-34 GT-R driven by Paul Walker in Fast Five. Since then, I have seen the McLaren P1, Ferrari La Ferrari, and Porsche 918 enter production, but none of these mega cars made me feel the way I did when I first saw that Skyline R-34.

But, when I saw the blue (ironically) 2017 Jaguar F-Pace for the first time at the 2015 Frankfurt International Auto Show, I was in love all over again. Based on how much we love SUVs and crossovers, the Jaguar F-Pace is destined to become very popular.

Jaguar first previewed the F-Pace as the 2013 C-X17 concept and very little has changed design wise between the concept and the production model. The F-Pace’s design is defined by its low, sleek roof, and assertive lines, and it looks genuinely sporty without being too extreme or polarizing. The company’s first-ever crossover stands out amongst its competitors thanks to its unique LED headlights, optional 22-inch rims, and a well proportioned body riding on top of a 113.1 inch wheelbase.

Well, the simple answer is everything because the 2017 Jaguar F-Pace is the first crossover to come from the famed British Marque’s factory.

Like all other Jaguar models, the F-Pace is designed to transport five occupants in the utmost luxury and includes all the mandatory gadgetry. However, unlike all other Jaguar models, the F-Pace has the ability to venture off the old beaten path and explore new horizons. The aluminum chassis underpinning the F-Pace is closely related to the F-Type sports car and the XE sport sedan. Like the XE, the F-Pace features an unequal length control arm front suspension and multilink rear setup with aluminum front knuckles, rear lower control arm, and upper rear links.

The steering in the F-Pace is controlled by a new, variable-ratio, electric-power-steering system and is attached with an additional mounting point for added stiffness. The Jaguar F-Pace also includes a brake-based torque vectoring system and an optional Adaptive Dynamics system, which is operatable via Normal or Dynamic modes to adjust the steering, throttle maps, transmission shift intervals, and adaptive dampers.

The center console features a new 8 inch InControl Touch infotainment system that controls vehicle and entertainment settings, plus the navigation.

The optional InControl Touch Pro increases the screen size to 10.2 inches and replaces many of the vehicle’s hard keys. The system features cool navigational items like Dead Reckoning, which keeps the navigation system active even when the GPS signal goes blank. The InControl Touch Pro also includes a 17-speaker, 825 watts sound system.

Both systems are compatible to work with Jaguar’s InControl Apps for mobile devices. The F-Pace also includes a new Activity Key, a waterproof, shockproof wrist band which allows the driver to leave the vehicle even when the traditional key remains inside.

When it goes on sale, the Jaguar F-Pace will be powered by two gasoline 6-cylinder engines and one turbo-diesel 4-cylinder motor.

To optimize engine packaging, the aluminum V6’s Roots-type supercharger is located in the 90 degree cylinder vee. The two gasoline V6 engines can also be found under the hood of the F-Type and the F-Type S sports cars.

Jaguar engineers claim that the base F-Pace can hit 60 mph from standstill in 5.4 seconds. The F-Pace S hits 60 mph in 5.1 seconds. The diesel engine, which is part of Jaguar’s new Ingenium engine family, propels the F-Pace to 60 mph in 8.2 seconds. The trio of engines are backed by the smooth-shifting, ZF-sourced eight speed automatic transmission, which sends power to all four wheels. In dry conditions, the AWD system sends all the power to the rear wheels and during low traction conditions, the system sends 50% of the power to the front wheels in 165 milliseconds.

The crossover also includes a new Adaptive Surface Response system, which is an evolution of Jaguar’s previous winter mode. It manages throttle, transmission, and the stability control system, depending on the type of surface being driven on; snow, sand, gravel, ice etc.

The base F-Pace with the supercharged V6 starts at $43,385. The powerful F-Pace S starts at $57,695. The least expensive of the trio is the F-Pace diesel, which has a starting price of $41,985. Additional trim levels accompanying the F-Pace and the F-Pace S are Premium, Prestige, R-Sport, and First Edition. 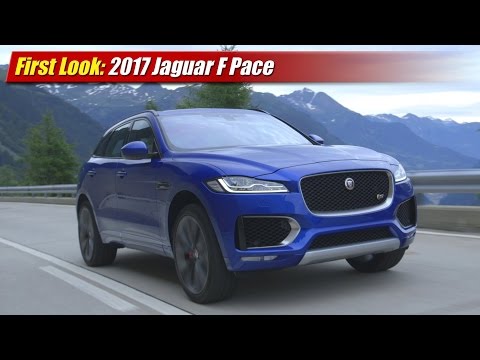