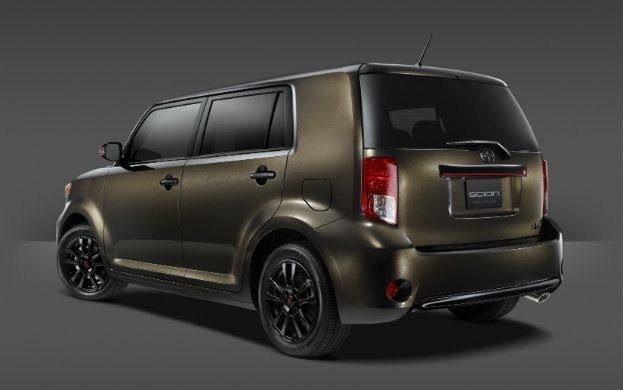 The Scion xB is going away but not before one more excursion – literally.  Scion teamed with 686 Technical Apparel for the xB 686 Parklan Edition, the final version of the vehicle.

The Scion xB 686 Parklan Edition emerges following a four year partnership between Scion and 686.  The pair first worked together in 2011, with the snowboarding inspired Numeric xB.  The Parklan Edition Scion derives from 686’s Parklan line, a cross between mountain and urban lifestyles.  This unique Scion xB still carries a snowboarding theme but incorporates open road elements too.

“Before we designed this car, we took an xB on a three week road trip from California to Boston and we captured the action in our movie, 686 Seconds,” said Brent Sandor, 686 Director of Marketing. “By taking the car from the city to the mountains and back again, we learned the xB can handle adverse conditions inside and out.”

A quilted camo pattern inside compliments the 16-inch alloy wheels, with the 686 logo, on the outside.  The wheels are finished in black to match the mirrors, door handles, and badges.   The Cocoa Bean Metallic paint in these photos is enhanced by red lines through the body.

Additional utility and storage comes through concealed driver’s side zipper pockets and seat backs, perfect for a map of the slopes.  Each Scion xB 686 Parklan Edition features all-weather floor and cargo mats; a nice touch according to Sandor.

“With all-weather floor and cargo mats on the inside, it was the perfect inspiration for our special edition collaboration,” he said.

Getting this final Scion xB right was critical, especially when considering the fan base.  It had to be both exiting and memorable.

“The xB has been part of Scion from the very beginning and we wanted to give it a meaningful send-off,” said Andrew Gilleland, Scion Vice President. “What better way to do that than to partner with 686, which caters to people who live their lives to the fullest?”

The Scion xB 686 Parklan Edition is a culmination of both the Scion and 686 image.  Scion, since beginning in 2003, has catered to a specific niche with its remarkably distinct vehicles.

The Scion owners I know are youthful (regardless of their actual age) and lead active, energetic lives. I have spoken with Scion customers who are regular skateboarders, snowboarders, mountain bikers, and outdoor hikers.

The clothing we wear is an expression of our personality, just like the vehicle we drive.  686 Technical Apparel provides an outlet for those “living it daily” but require style and functionality when doing so.  686 founder, Michael Akira West, was a skateboarder in the early 80s and appreciated the lifestyle such culture offered.

It later became the inspiration for his apparel company.

With the Scion xB 686 Parklan Edition, the city meets the slopes.  It’s sure to find favor with the urban dweller who secretly (or not so secretly) craves weekend treks to the great outdoors.   For more information, watch the video below – it’s interesting to see how these two companies find common ground when developing the final xB.

Scion xB 686 Parklan Edition went on sale this week and starts and $19,685.  Perhaps in a gesture of significance, only 686 will be manufactured.