Father Arkus-Duntov and His Adopted Son, The Chevrolet Corvette Many of us remember the first day working at a job. For some, it would be an experience we would prefer forget. Other times, we look back proud we have made a meaningful, enriching impact. Whatever we do, we want to know that our efforts at a particular job will be meaningful and memorable. On May 1st, 1953, a Belgium-born Zora Arkus-Duntov first reported to work at Chevrolet. An automotive engineer and occasional sports car racer, Duntov’s arrival as an assistant staff engineer to Maurice Olley would build a legacy that greatly contributed to the fact we can celebrate a monumental 60th birthday for the Chevrolet Corvette.

Harley Earl, General Motors head of the company’s Art and Color studio during the 1950s, was the architect of the Corvette. A stubborn but brilliant visionary, Earl was more recognized for the large and lavish cars such as his final design, the 1959 Cadillac. When the fiberglass-bodied two-seat sports car premiered at the 1953 GM Motorama in New York, the first Chevrolet Corvette was beautiful but was not the performance vehicle we love today. In fact, Harley Earl would never fully accept the Corvette as one of his cars. While Earl was technically “the father of the Corvette“, hardcore fans would recognize Zora Arkus-Duntov as the father who nurtured and groomed the fiberglass vehicle into America’s sports car. A Russian-Jewish immigrant to the United States, Zora Arkus-Duntov was graduated from a technical school in Germany. It was there young Duntov was tempted by performance cars through a friendship with Alfred Neubauer, manager behind the 1930s Mercedes-Benz grand prix team famously known as the “Silver Arrows”. With the outbreak of the Second World War, Zora Arkus-Duntov put his technical education aside to serve in the French Air Force. When the Germans invaded France, Duntov was forced to escape to New York with his family. Settling into American life, Zora Arkus-Duntov founded a business with his brother that manufactured munitions during the war. When peacetime arrived, the Duntovs turned their focus towards building hot rods.

Attending the 1953 GM Motorama, a 43-year old Zora Arkus-Duntov and the Chevrolet Corvette met in a serendipitous fashion. So captivated by the potential of the Corvette, Duntov aggressively pursued a chance to work with General Motors, even sending chief engineer of Chevrolet Ed Cole a technical paper. His efforts granted him a job in May 1st, 1953 and he quickly devoted himself to developing performance creditability for the vehicle. Entering production nearly two months after he joined Chevrolet, Zora Arkus-Duntov’s passion for auto racing (including participation in two runnings of the 24 Hours of Le Mans) and his background in building hot rods gave the Corvette a fresh outlook. Duntov was instrumental in advancing the Corvette beyond the 150-horsepower, Blue Flame straight-six engine. As the Chevrolet Corvette was on the verge of cancellation by General Motors set two years after its release, Zora Arkus-Duntov along with Ed Cole won the right to enhance the performance characteristics to the point it would become a real sports car. Adding the 265 cubic-inch V-8 small-block engine in 1955, Duntov tuned the Corvette’s behaviour for better handling curing the lethargic attitude of the 1953 model. In addition to a 1956 facelift to the Corvette, sales indicated that Duntov and Cole determined the correct direction for the sports car.

Zora Arkus-Duntov’s influence on the Corvette also extended to auto racing. Personally setting a Peaks Pike Hill Climb record with the Chevrolet Corvette, he later set a 150.582-mile per hour speed record on Daytona Beach in 1956 through the development of a special camshaft. In the hands of other drivers, the Corvette competed at Sebring and later Le Mans. Duntov’s racing involvement in the late 1950s and 1960s were largely unofficial due to General Motors racing ban at the time. Nonetheless, Zora Arkus-Duntov persisted to develop race-oriented Corvettes such as the Z06 and Grand Sport in the 1960s. Lightweight and built to directly compete with Carroll Shelby’s Cobra racecar, the Grand Sport Corvettes were campaigned successfully with driver line-ups consisting of AJ Foyt, Jim Hall and Roger Penske. Much of what Duntov tested on the track influenced the second-generation Corvette. Hand-on-hand with the muscle car era, the high performance Corvette solidified the sports car’s continuing influence in the Chevrolet line-up. 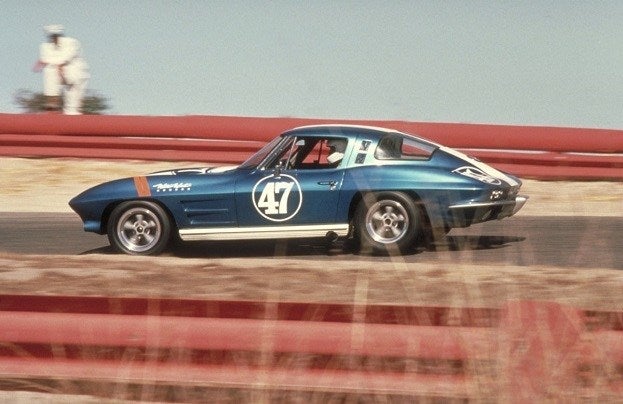 Retiring from the position of chief engineer in 1975 at age 65, Zora-Arkus Duntov continued to be an avid supporter of a vehicle existing as a motorized child until his passing on April 21st, 1996. Duntov was active in the National Corvette Museum where he was posthumously honoured with a Hall of Fame induction in 1998.

With the 60th year of the Chevrolet Corvette being commemorated with the anticipation of the seventh-generation version of the vehicle, Zora Arkus-Duntov’s engineering touches are as vibrant as ever. An all-new LT1 V-8 engine generating 450 horsepower and the overall high performance car presentation of the 2014 Corvette Stingray represents everything Duntov invested into the sports car.