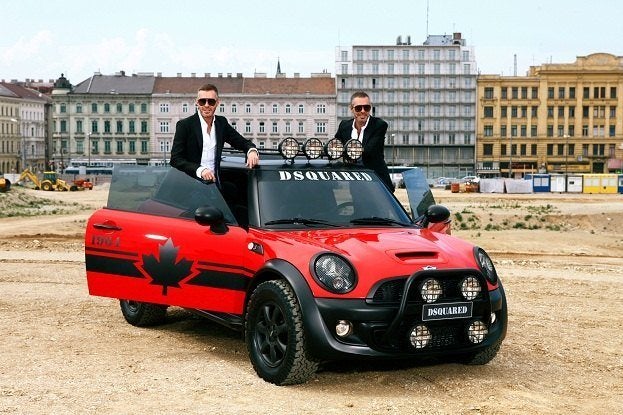 Too often, we are brought to the suspicions that some corporations care more about the impressing shareholders rather than the society in which their business inhabits. While too many times those companies have proven deserving of scepticism (not unlike some individuals), there are considerable efforts making a positive contributions beyond their own zeal for profitability.

BMW’s MINI brand has been supporting non-profit organization AIDS LIFE’s major gala called the Life Ball. Hosted in Vienna, Austria, the 2011 Life Ball took place on May 21st as a massive gala said to be one of the largest in the world. With fashion houses such as Versace, Diesel, Diane von Furstenberg and Kenneth Cole providing clothing and apparel displays as part of the Life Ball, the MINI product line-up has also been involved as a mechanical canvas. Designer representing the look at the 2011 Life Ball had been the Canadian designer brothers Dean and Dan Caten’s DSQUARED2 company. Connected to various names including Madonna, Rihanna and the Barcelona Football Club, designer DSQUARED2 performed some one-off magic on a MINI Cooper S to benefit the charity event.

As many of us attempt to conceive how a fashion designer would approach a MINI Cooper S, a good deal of automotive enthusiasts would be taken by surprise by the direction taken by Dean and Dan Caten. While some of us witness fashion running amok from what translates everyday style at these fashion shows, the 2011 Life Ball revealed a DSQUARED2 MINI Cooper S in road-worthy trim. The red MINI Cooper S is companioned with black graphics that includes a maple leaf worn on each door (symbolic to the designer’s home country) and the number 1964 identifying the DSQUARED2 brother’s birth year. Existing on a raised chassis bolstered by deep-treaded all-terrain tires, the DSQUARED2 creation described as “Red Mudder” is in fact more than capable for even severe road experiences. If difficult roads take the ultimate toll on one of tire of this MINI Cooper S, a full-sized spare is found on the rear tailgate. Continuing to complement this special MINI Cooper S is black wheel flaring, roof rack and a powerful set of rally lights within the grille as well as on the roof.

Inside the cabin shaded by well-tinted side windows, the MINI Cooper S designed by DSQUARED2 continues to assert the rugged “Red Mudder” appearance. Floormats are made from aluminum sheeting structured to shape under the feet of the driver and passenger. Leather seating decked with additional maple flag symbols on the headrests is coupled within the interior styling. Completing the inside, this one-off DSQUARED2 MINI Cooper S features an opening roof.

Developed especially for the 2011 Life Ball, the DSQUARED2 MINI Cooper S will be auctioned off with the proceeds going to AIDS LIFE charity combating AIDS and HIV diseases.